It has been a year since the Obed Mountain Coal Mine disaster. The mine was owned at the time by Sherritt International but has since been purchased by Westmoreland Coal Company. The breach of a containment pond spilled 670 million litres of toxic tailings into the Athabasca River and its tributaries. Five weeks later this plume of contaminated water had worked its way through the Peace Athabasca Delta and into the North West Territories.

To date, no provincial or federal charges have been laid, nor has there been a formal explanation of the contents of the spill, the impacts to the aquatic life of the impacted rivers, or the human health risks. Downstream communities who depend on the land for their livelihoods, traditional foods, and cultural activities remain in the dark about the ultimate consequences of the spill. “Albertans count on their government to keep their waters swimmable, drinkable, and fishable. This is their job,” says Glenn Isaac, Executive Director of North Saskatchewan RiverKeeper. “Polluters and the public need to know they take this job seriously.”

“In the wake of the Mount Polly disaster in B.C., the B.C. government decreed that all tailing structures in the province would be inspected. No such action was taken in Alberta,” says Bruce Maclean with Mikisew Cree and Athabasca Chipewyan First Nations Community Monitoring Program. The truth however, is that the tailing structure that failed at the Obed mine had been inspected only weeks before failing. However, the fact that the federal and provincial investigations into the spill are still continuing prevents Albertans from learning why the spill occurred and whether the inspection prior to the spill identified any warning signs of a potential breach. Also, the general public has largely been denied tours of the site following the spill and during the reported reclamation. Clearly, action is required to increase government transparency.

The coalition of environmental groups listed above call on the Government of Alberta to provide better oversight for mining projects from design through inspection and monitoring to mitigation, reclamation, and increased enforcement. “The lack of enforcement and charges for a spill of this magnitude calls into question the approval of any mining development in Alberta,” says Brittany Verbeek, AWA Conservation Specialist. “The cumulative effects of mining operations and spills across multiple watersheds are negatively impacting aquatic and land ecosystems, and consequently human health.” 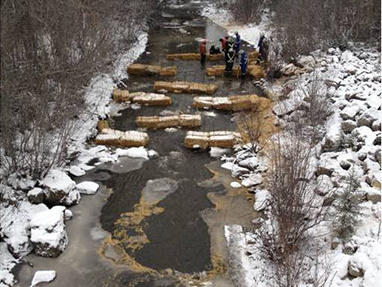