The Canadian and Alberta governments recently laid charges against Plains Midstream for its June 7, 2012 pipeline spill of 460,000 litres of high-sulfur-content crude oil into the headwaters of the Red Deer River. Alberta Wilderness Association (AWA) supports the laying of these charges under both federal and provincial laws as a step towards better management of the risks of Alberta’s aging pipeline network.

“Alberta and Canada have decided to hold crude oil pipeline operator Plains Midstream to account for the harmful effects of its 2012 pipeline spill,” says Carolyn Campbell, conservation specialist at AWA. “This sends an important signal that operators must better manage risky situations such as shallow buried pipelines during spring flooding season.”

Forty percent of Alberta’s pipeline system was built before 1990. Areas of particular vulnerability are mountain and foothills headwaters, which provide much of Albertans’ water supply as well as important wildlife habitat. Many older pipelines are buried only a few meters below headwaters stream beds; these stream beds are scoured out during spring runoff or storms, which can expose pipelines to fast-moving heavy debris. The Plains Midstream pipeline was directly exposed to strong spring river flows, according to the Alberta Energy Regulator (AER)’s March 2014 Investigation Report on the pipeline spill.

The Red Deer River supports many fish species, including populations of threatened bull trout, Alberta’s provincial fish, in its upper reaches. Its river corridor provides habitat for migratory birds, amphibians and other wildlife.

AWA remains concerned that more pro-active pipeline regulations should be in place, such as replacing shallow-buried older pipelines with deeper directionally drilled pipelines at water crossings, and reducing shutoff valve spacing. The closest shutoff valve upstream of the river crossing where the Plains Midstream pipeline broke was 14 kilometers away.

A December 2012 pipeline safety report commissioned by the Alberta government (released August 2013) was widely criticized for not examining specific incident responses, but it confirmed that safety improvements were needed in Alberta’s pipeline system. Its key findings included a need for better management of water body crossings, stronger inspection and testing requirements in high risk areas, and stronger audit and enforcement capacity by the energy regulator. 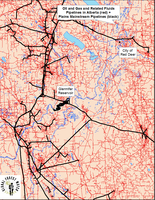