Alberta Wilderness Association (AWA) has learned that sensitive rough fescue and mixed grasslands on the Milk River Ridge are being opened up to exploration activity in the Alberta Bakken oil play. At the same time, efforts to secure legal designation for these lands are being delayed until the Government of Alberta releases its South Saskatchewan Region Plan (SSRP).

Local ranchers and the Alberta Wilderness Association are asking government to place a moratorium on new surface development in this area until the SSRP is released. Failing that, they will also be asking the newly created Alberta Energy Regulator to have public hearings on these new developments. Cliff Wallis, AWA’s Vice-President, said that “it is perverse that conservation action has ground to a complete stop while development can proceed in this sensitive area. It’s a lot like fiddling while Rome burns.”

In February 2011, the South Saskatchewan Regional Advisory Council (RAC) provided their advice to government. The RAC recommended that a regional plan for southern Alberta focus on water supply, economic development and conservation needs. One of the large blocks of grassland recommended by the RAC as a “Candidate Conservation Management Area” is the Milk River Ridge west of the town of Milk River adjacent the Twin River Heritage Rangeland. The area is designated as environmentally significant and currently has Protective Notations on government files which identify these areas as potential sites of rare fescue grasslands as well as being important for species at risk and wetlands.

Despite these Protective Notations, DeeThree Exploration Limited, an oil and gas exploration company based in Calgary has been attempting to secure surface access to lands in Township 3-Range 18-W4M to conduct an exploration program. Cheryl Bradley, grassland ecologist, noted: “there will be direct loss of valuable grassland habitat as well as impacts on sensitive wildlife species, habitat fragmentation and increased risk of spread of non-native plant species.”

Local ranchers and leaseholders are concerned about the impacts such development would have on these environmentally significant grasslands and have been trying to get them designated as Heritage Rangelands under provincial protected areas legislation. Unfortunately, they have been told that nothing can be done until the province releases the SSRP. Even then, it could be a long process of public consultation on the government plan before any protected areas are legally designated. Audrey Taylor, a local rancher, said: “We have pleaded to have this area protected but were told nothing can be done until the plan is released. This wonderful prairie and wetland paradise is too fragile and precious to allow oil wells and roads to damage it.”

Protected area targets have not been met in the Grassland Natural Region in Alberta which are far less than the global 12% recommended by the Brundtland Commission. Less than 1% of the Foothills Fescue and Mixedgrass Natural Subregions have any legal protective designation. The Northern Great Plains ecoregion has been identified as a global priority for conservation and protection as one of the World Wildlife Fund’s Global 200 ecoregions. Temperate grasslands are the biome most at risk in the world. Birds that nest in temperate grasslands are the most rapidly declining group of birds in North America. 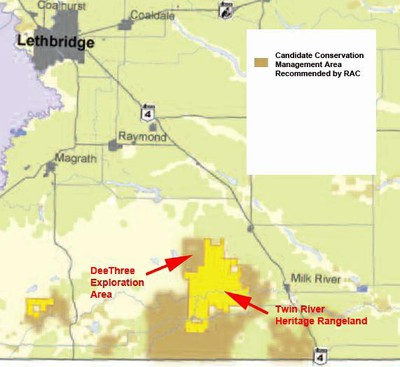