What are Native Prairie Grasslands Worth?

A report prepared for the Ranchers Stewardship Alliance Inc. with the intent of helping inform federal and provincial policy that can contribute to creating a more effective means of recognizing and supporting the long term conservation value of this endangered biome.

Today Canada lags other countries in the developed world in development of policy that recognizes the value native habitats provide. Funding for specific environmental programs is relatively insignificant compared to those for export grains. With the exception of the period following the BSE crisis in 2003, the prairie livestock industry has remained essentially unsubsidized. By not participating in income stabilization programs available through conversion of native prairie to cropland, livestock producers have forgone significant amounts of income since settlement. For example, the average cropland payout due to government programs was estimated at about $50/acre per year in the early 1990’s (i.e. $73/acre in 2012 dollars). Yet, we now realize that farmers and ranchers who sustainably manage native prairie are the stewards of much of the last remaining ecologically-rich places remaining in Prairie Canada and research has shown that society continues to benefit greatly from the Ecological Goods and Services that these native grasslands provide.

Canadian agriculture policy has historically promoted practices that in many applications have been shown to impose a range of environmental costs. These costs have included increases in net greenhouse gas emissions and reduced carbon sequestration, increased soil erosion and degradation, permanent loss of biodiversity including species at risk, wetland drainage, and ultimately incremental climate change. Many of these practices can provide significant private benefits to the agriculture producer, and these private benefits are further augmented by the incentives introduced by the policy measures that encourage the management practice. However, these associated environmental costs are imposed primarily on society at large and less so on the individual producer making the management change. These types of costs are referred to in economics as external costs. In the presence of external costs the market will fail to allocate resources efficiently, meaning that the total net benefits to society (i.e. social welfare) will not be maximized. In these types of situations – where there are external costs and/or there are government policies that encourage specific management strategies – natural capital may not be managed or maintained at levels that are optimal to society.

Mainstream money-based arguments misrepresent the biophysical dimensions of human ecological reality. Where research exists in which Environmental Goods & Services have been valued, in every case the value of the loss of these “non-market” goods and services outweighs the market or commodity benefits of resource conversion. In some cases, research has shown that the value of non-market goods and services can outweigh market values by up to 100:1. Investigations undertaken in this project are consistent with these findings and show an undervaluation of native prairie grasslands. Decision makers need to include this factor because failure to value the natural capital of native grasslands has long term negative implications for society.

Results of this project investigation show that: 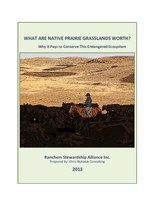