Today the Alberta government will once again violate its own caribou policy and the federal caribou recovery strategy by auctioning yet more new oil and gas leases in the ranges of threatened Alberta caribou, including in the Little Smoky range that is more than 95% disturbed. Alberta Wilderness Association (AWA) calls on the government to cease this irresponsible energy development approach and act on its promises to maintain and restore caribou habitat.

In October 2012 the federal government published its final boreal woodland caribou strategy that requires each province to develop an action plan to achieve at least 65% undisturbed habitat for each caribou range.

AWA has received no reply to its February 6, 2013 letter to Energy Minister Hughes requesting deferral of new leases in the Little Smoky caribou range and a commitment to restore disturbed caribou habitat. 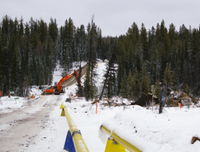