Wild Lands Advocate article, October 2012, by Sean Nichols. The new minister of Alberta Tourism, Parks and Recreation (TPR), Christine Cusanelli, was introduced to AWA’s concerns for Alberta’s wildlife, wild water and wild lands. She was the celebrity guest on a tour of the Milk River Canyon vistas and other important southern Alberta grassland areas. 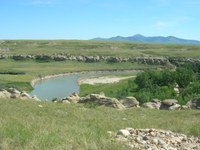