The Moose Lake Access Management Plan is a truly innovative advance in the management of cumulative industrial impacts on Alberta public lands. It applies to a 10 kilometre wide Zone around the Gardiner and Namur Lake reserves of Fort McKay First Nation (the Moose Lake reserves), covering 100,000 hectares total (Figure 1). Half of the Zone is on ‘mixed use’ public lands outside designated protected areas. The Plan recognizes that ‘edge effects’ to wildlife habitat extend 50-200 metres beyond industrial disturbance points. It sets a maximum limit of ‘buffered’ industrial disturbance in the Zone at 15% (it is currently 13.5%); it further allocates the allowed disturbance limit amongst the forestry, oil and gas and sand/gravel sectors. It commits to significant community-based monitoring, enhanced reclamation practices, and restoration of legacy seismic lines. This is a significant, encouraging precedent that should inform management of critical habitat of species at risk – such as woodland caribou, native fish and grasslands species – and further the exercise of Indigenous rights and traditional land uses everywhere in Alberta.

The proposed expansion of Kitaskino Nuwenëné Wildland Provincial Park (Figure 2) is significant in size and habitat value. It covers 144,000 hectares, roughly 15 townships, of boreal highlands and will almost double the existing Park’s size. It will connect more protected lands with the existing Birch River Wildland Provincial Park to the west. It includes significant range lands of the threatened Red Earth woodland caribou population. From a watershed perspective, it will protect more lands south of Wood Buffalo National Park whose waters flow into the Peace Athabasca Delta. The Delta is one of the world’s largest freshwater deltas, supporting globally significant wildlife populations.

The proposed expansion of this ‘buffer zone’ Wildland Provincial Park is an important step in addressing one of the shortcomings in federal-provincial management of the Peace-Athabasca Delta, as identified in 2017 by UNESCO investigators. More issues remain to adequately manage cumulative impacts and risks from oil sands and hydroelectric industries to the Peace-Athabasca Delta. 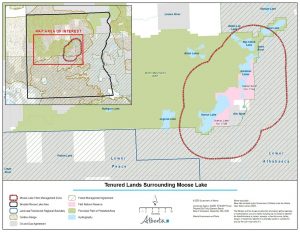 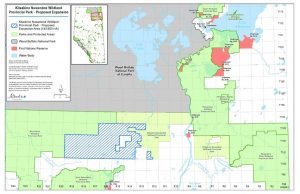