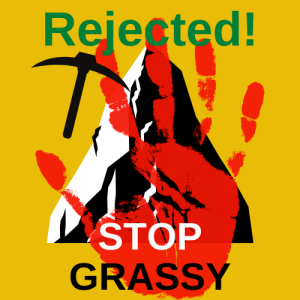 And…it really is a wonderful morning. This may very well be one of the last times I write to you about Grassy Mountain. Yesterday afternoon, the Grassy Mountain Joint Review Panel did something I didn’t think would happen in my wildest dreams. As hearing commissioners of the Alberta Energy Regulator (in other words, as provincial decision makers), they rejected all of the applications Benga Mining made for its coal project. They declared the project was not in the public interest.

Without the key provincial approvals under the Coal Conservation Act and other provincial laws, the federal government does not have to take any action. There’s no need to try to pressure the federal government to reject Grassy Mountain – the AER, through these three hearing commissioners, did just that. Since I woke up this morning the lyrics from a certain Wizard of Oz song are rolling over and over in my head (no, it’s not Somewhere Over the Rainbow).

For your information there are some links to the decision, the executive summary, and a federal agency news release below. I just wanted to include one paragraph from the Executive Summary here. It’s this one:

“In our capacity as a panel of AER hearing commissioners, we find that the project’s significant adverse environmental effects on surface water quality and westslope cutthroat trout and habitat outweigh the low to moderate positive economic impacts of the project. Therefore, we find that the project is not in the public interest. In making this determination, we understand that this means that the expected employment, related spending and economic benefits for the region will not be realized. However, even if the positive economic impacts are as great as predicted by Benga, the character and severity of the environmental effects are such that we must reach the conclusion that approval of the Coal Conservation Act applications is not in the public interest.”

I really can’t tell you how remarkable, how uncharacteristic of past AER hearing decisions, this language is. I’ve highlighted the last sentence because, to me, it speaks volumes. The Panel didn’t accept Benga’s rosy portrayal of the future of metallurgical coal. But, even IF it had accepted Benga’s views on royalties, coal markets/prices/production, and the future of steel making, Commissioners Bolton, O’Gorman, and Matthews STILL regarded the character and severity of the environmental effects as so serious that they could not approve the project… even presumably with a multitude of conditions (if you remember the joint review of the Northern Gateway Pipeline, when that Panel approved the project it did so with more than 200 conditions that Enbridge would have to fulfill).

We have seldom, if ever, seen AER hearing commissioners privilege the environment in this way (I think the AER’s predecessor, the EUB, acted this way when it denied the application from Polaris Energy to drill for sour gas in the Whaleback just north of where Benga wanted to mine for coal…that was in 2004).

I suggested yesterday in another Grassy Mtn missive I sent out that, in keeping with the remarkable nature of this decision, the Joint Review Panel members had their eyes firmly fixed on the future. By stressing the importance of surface water quality and natural wonders such as westslope cutthroat trout, the Panel told governments and corporations alike that the status of those resources tomorrow must be privileged today.

In looking back at the subject of this note to you I think I mis-titled it… Grassy Mountain is very much alive, it’s coal mining that’s dead.

Thanks for your thoughts and efforts since the fall of 2020 to help deliver this tremendous outcome.

PS – now I hope governments will get busy on the hard work of identifying and promoting good livelihood opportunities for Treaty 7 Nations and the people of the Crowsnest Pass.

PPS – yesterday Montem Resources and Atrum Coal requested that trading in their shares be stopped. The categorical rejection of Grassy by the JRP is poison to their mining project ambitions re Tent Mountain, Chinook, Isolation South, and Elan South. Before Montem requested the halt its shares lost a further 20% of their value (they last traded for 7 cents). Atrum’s suspension was approved before trading began. Before the Grassy announcement, its last trade was at 4.7 cents.

PPPS – the links:
The panel’s report, which includes an executive summary, is available on the Canadian Impact Assessment Registry, reference number 80101: https://iaac-aeic.gc.ca/050/evaluations/document/139408?&culture=en-CA (CIAR #5093)

The report is also available on the Alberta Energy Regulator website: https://static.aer.ca/prd/documents/decisions/2021/2021ABAER010.pdf