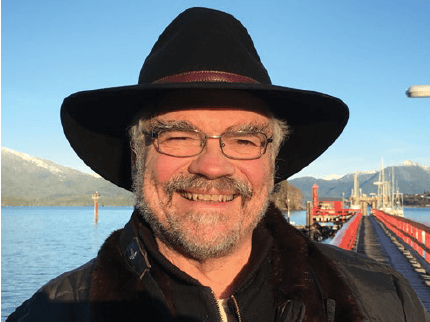 I would wager that many men of my generation fell in love with conservation and wilderness through our interests in hunting and fishing. This was certainly the case for Dr. Mark Boyce, one of AWA’s 2019 Wilderness Defenders award winners. Mark grew up in Iowa, in the U.S. Midwest, on one of the tens of thousands of farms that dot the state’s landscape. “Every minute that I wasn’t plowing a field…,” he told me, “I was out hunting, fishing, trapping…I loved the outdoors and couldn’t imagine doing anything else.”

Mark’s selection as a 2019 Wilderness Defender rested on two pillars: the excellence of his academic research and his commitment to use his research knowledge to try to promote wildlife conservation. If I had to try to identify one theme animating Mark’s work it would be his interest in trying to identify the mechanisms responsible for fluctuations in the population sizes of large mammals and furbearers. Here in Alberta that has prompted Mark to consider how our fish and wildlife populations can be sustained given the activities of natural resource industries. By any metric, Mark’s research is superb. For example, in 2017 Mark and his team of researchers published 20 peer-reviewed publications. Some of the other reports they produced in that year were on grizzly bear management and how ranchers and large carnivores can coexist. Part of Mark’s academic contribution also may be measured by the healthy handful of graduate students and post-doctoral students who work in his research lab before moving on to new careers or further graduate studies. In this regard too, his contribution is exemplary.

Both our conversation and his record leaves no doubt Mark views the academic role as one where, when expertise warrants, academics should weigh in more publicly on wildlife issues. I had asked Mark for his views on what role academics should play when it comes to efforts to recover species who are at risk of extirpation from the land. Mark replied by sharing some of his experience as part of the efforts from roughly a decade ago to force the federal government to take stronger actions on behalf of greater sage-grouse through the Species at Risk Act (SARA). Ecojustice, acting for AWA, Federation of Alberta Naturalists, Grasslands Naturalists, Nature Saskatchewan, and Western Canada Wilderness Committee, asked Mark to be an expert witness in the legal action our coalition launched against the federal government. As some of you may recall, we argued that the federal Minister had an obligation under SARA to identify critical sage-grouse habitat in the recovery strategy. Minister Kent had failed to do that.

The Ecojustice request was one that Mark took to his department chair. His personal views aside, he had concerns that accepting the request might threaten federal funding to the university. To her credit, Mark’s chair replied, in his words: “That’s why we hired you; get after it.” Mark knows very well that the peer-reviewed papers he may write may not influence conservation decision makers as they arguably should. “So, if we’re going to see our work actually roll out,” he said, “we have to be out there attending public meetings, talking to public officials, working with organizations like AWA.”

Risks, however, can accompany being “out there,” of playing the public interest or public service role we were talking about. One of those risks comes from decision makers and/or interest groups who misinterpret or cherry pick your research in order to favour their preferred outcomes. I think Mark experienced this when he was at the University of Wisconsin – Stevens Point. In the late 1990s the U.S. Congress, at the urging of Republican senators from Montana and Idaho, commissioned Mark to study whether the habitat in the Selway-Bitterroot and Frank Church-River of No Return Wilderness Areas would support the re-introduction of grizzly bears. Mark’s analysis concluded the area could support ultimately anywhere between 308 and 321 bears 90 years from now. This estimate supported an earlier U.S. Fish and Wildlife Service estimate that as many as 280 bears could be sustained in this habitat. For the Republican senators, this was not the conclusion they were hoping for. Instead, they had hoped the research would show there was no reason to support grizzly reintroduction to this region. They then misinterpreted one of the report’s estimations and demanded the federal government de-list the grizzly as a threatened species under the Endangered Species Act.

Given Mark’s extensive knowledge about threatened species, I asked him what we need to do in order to improve their prospects. Secure, healthy habitat for those species is vital. If that necessity guides us, he’s optimistic that a species such as greater sage-grouse won’t be extirpated from Alberta’s landscape: “I think that we could probably recover sage-grouse if we really go after the habitat and do an aggressive job of protecting those landscapes, removing fences, managing the livestock in a way that’s really responsible.” Does this mean that we should take cows off of the landscape? Absolutely not. Mark emphasized: “We want cattle on those landscapes but we want light cattle grazing.”

We also spent some time talking about the future of the conservation movement. There I think Mark had some valuable advice for AWA. He encourages us to imagine ourselves as bridge-builders, to reach out to groups such as Backcountry Hunters and Anglers, recognize the goals we share, and pursue them vigorously. Such advice is offered optimistically and is paired with his belief that universities such as the University of Alberta are poised to make important contributions to challenges such as climate change. “We’ve got so much research expertise across campus…that we could have a pretty powerful program…yes, I’m optimistic, I think that people are seeing the writing on the wall…and we can do amazing things.” For the sake of my grandsons and the generations that come after them, I hope Mark’s right.