I checked the alarm clock after a restless night. It was almost 5:30 a.m. – time to get up to start the wood cook stove for an early breakfast and quick get-away. This was a special day to hike with my three oldest grandchildren – Zara, Kai and Maia (aged 12, 13 and 14) – to Coral Ridge at the southern extremity of Mt. Stelfox. The plan was to drive from our cabin property near Rocky Mountain House to an access point on the David Thompson Highway near the Cline River bridge, an hour and a half west of Rocky. We were scheduled to pick up my younger and fitter cousin Jim Stelfox on the way. Jim had cheerfully agreed to provide companionship and emergency back-up in case we got ourselves in a pickle.

Every August, for the past eight years, my wife Teresa and I have hosted a week-long ‘cabin camp’ with our grandkids, at our property near Rocky. A key goal has been to foster a deeper appreciation and respect for the natural world within our urban-based grandkids. Our simple, back-to-the-basics log cabin at our 320-acre forested woodlot in the foothills southwest of Rocky has been the setting for these camps.

I sensed the older grandkids were now ready for a more adventurous wilderness experience. Our planned day hike on Mt. Stelfox would be a good step in that direction. I knew Maia, Kai and Zara were physically quite able to do this hike, if suitably motivated and prepared. We had discussed the hike for over a year now. Mt. Stelfox was an important touchstone for our family, having been named after their great, great grandfather Henry Stelfox. My grandfather played a significant role with early settlers, indigenous peoples, and fish and wildlife conservation, in west-central Alberta during the first half of the 20th century. The previous evening we had reviewed our trip preparations, packed up whistles and bear bells, lunches, day packs, hiking poles and water bottles. After a quick breakfast, we headed in to Rocky to pick up Jim. The weather was forecast to be very warm and mostly sunny. I wanted to be on the trail by 9:30 a.m. so that we could do the more strenuous part of the hike during the earlier, cooler part of the day.

We arrived on schedule. Clear skies and cool, fresh morning air greeted us as we headed up the Coral Creek horse trail. The first section of trail paralleled the lower Cline River and was relatively flat and easy going. As we swung north away from the Cline River, the trail became steeper and provided scenic views of Coral Creek Canyon and the surrounding mountains. Zara, Kai and Maia were in good spirits and keen to make quick progress toward our destination. As we hiked, Jim and I were quizzed on how much further it was before we turned off the main trail to start our ‘off-trail’ climb towards the crest of Coral Ridge. We took an occasional short stop to rest, drink some water and admire the great views.

An hour and a half into our hike, we reached a prominent lookout over Coral Creek Canyon. This was the point where we left the main trail and started our climb through the forested lower slopes of Coral Ridge. At this point everyone was feeling loosened up and excess outer wear had been shed. It was rapidly turning into the very warm day weather forecasters had promised us.

The terrain steepened quickly as we headed up slope through semi-open lodgepole pine forest. There was a fairly well-worn trail with some flagging for the first 250 m, as it switched back and forth to get up and over some fairly steep bedrock outcroppings. It was much slower going now and the single trail we were following soon dissolved into numerous, indistinct trails. There were few, if any, markers to confirm our course. We were now on the ‘off-trail’ portion of our hike. The grandkids were showing some fatigue and concern for how much further it would be to our destination. Due to the lack of a distinct trail and trail makers, and some back and forth to find easier hiking routes, I think they may have wondered whether Jim and I really knew where we were going. Such concern made it a good time for another stop to eat our lunch and evaluate our progress.

Forest cover now obscured our views of the surrounding mountains, forcing us to pay more attention to what the pine forest offered. Scattered juniper and fir were characteristic of its understory. As well, blueberry, willow and other shrubs contributed to the richness of the understory. The fact that the latter’s leaves were starting to turn yellow, red and purple signaled that, despite the heat of this day, fall wasn’t very far away.We hadn’t seen or heard much sign of animal life as yet – only the occasional call of a gray jay and ravens flying overhead. Some older deer droppings were scattered on the forest floor but no fresh sign. Jim and I assured the grandkids that we were on course, making great progress, and that it shouldn’t be more than an hour or so before we reached treeline.

After a restful, rejuvenating lunch and a refreshing drink of water, we continued to angle upslope in an easterly direction. We kept an eye out for a steep, narrow draw which would help guide us to the open ridge slopes near our goal. Cousin Jim continued in the lead to find and follow paths of least resistance through the forest, working around deadfall, heavier undergrowth and steep, rocky sections. I started to lag behind the group, needing to pace myself at a level I could maintain. My cardiovascular system was showing its age, particularly at these higher elevations and on steeper terrain. Jim and the grandkids were showing their grit and desire to get to the top sooner rather than later, but graciously made frequent short stops to allow ‘grandpa’ to catch up. Our collective focus was now on getting through the forest and to the open ridge. We weren’t paying much attention to our immediate surroundings as we pushed onward and upward. However, we did have the pleasant diversion of seeing a blue grouse at close quarters, foraging on the forest floor and scurrying off to the side, just far enough to be out of our way.

The trees were becoming shorter, with a noticeable increase in subalpine fir. Significant openings in the forest canopy made one feel that we might break into open alpine terrain at any time. And suddenly, there we were with an unobstructed view of the open ridge ahead of us. The mood quickly shifted to one of excitement peppered with some relief. Apprehension about whether we could/would make it to the top disappeared instantly. In the distance we could see the plaque which had been installed in honour of the mountain’s namesake. It was located just below the ridge line on steeply slanting shale bedrock. Between us and the plaque was a scree slope and some large boulder jumbles. It only took another 15 minutes for the grandkids to make their way up to the plaque, with Jim and I close behind. It had taken us two hours to make the relatively short climb from the Coral Creek Canyon viewpoint to this point and a total of 3.5 hours from where we had parked the vehicle. 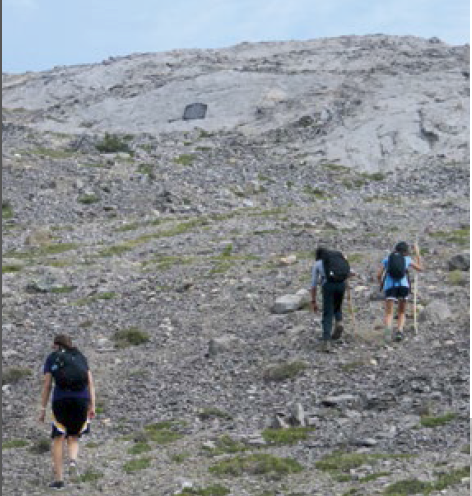 Figure 1 – Grandchildren scrambling up Coral Ridge at the southwest end of Mt. Stelfox. The plaque honouring Henry Stelfox may be seen near the top of the photo. © H. STELFOX

We found some rocks to sit on where we could take a well-deserved break, finishing our lunch and enjoying the mountain scenery. It wasn’t long before Kai was up and headed to the ridge top to see the other side. Maia and Zara soon followed. From the ridgeline there were unrestricted views of the surrounding mountains in all directions. Below to the east and southeast was Lake Abraham, the mouth of the Cline River, the Kootenay Plains, and the North Saskatchewan River. It was most rewarding to see how the grandkids embraced the moment and marvelled at the grandeur of the views. I could feel their shared satisfaction in having reached our destination, proving to themselves and each other that they could push through mental and physical challenges they hadn’t experienced before. I took some satisfaction myself in having made it up here once again – hoping I still might be able to do this hike in another few years with some of the younger grandkids.

The return hike to our parked vehicle took a couple of hours, but it was downhill for the most part and was now a known, do-able challenge. We worked our way down the steep forested slopes on a more direct route, following occasional game trails. Enroute, Kai spotted a golden-mantled ground squirrel sitting motionless in an upright posture. Kai was able to slowly walk up close to the squirrel without causing it to dash away and I took a picture. It was a small, but special moment, to further connect with nature in this beautiful wilderness setting.

Once we reached the main horse trail, the grandkids took the lead, keen to demonstrate their physical prowess in beating us back to the vehicle. I asked only that they stay in sight of Jim and I, to ensure their safety. It was with considerable fatigue and much satisfaction that we reached the vehicle around 4:00 p.m., a little more than six hours from the start of the hike. The final payoff would be a Boston Pizza supper in Rocky, after our hour and a half drive back to town.

A couple of days after the hike, I asked Kai, Zara and Maia to provide me with feedback on what they found to be especially enjoyable, challenging, and memorable from our adventure. Their comments focused on the physical aspects of the hike, including their satisfaction in reaching the top of the mountain, their sense of accomplishment in pushing through new and difficult physical challenges, and our ability to find our way to the top without well-marked trails. Kai commented: “I learned that if you get lost you can always find your way as long as you know the general direction of where you are headed.” Here I think he was referring to the unease they had all felt when we were on the unmarked ‘off-trail’ portion of the hike. We discussed that issue and I suggested, as perhaps a grandfather should, that they needed to think about the desirability of following their own uncharted path as they grow up and not just follow the well-trodden paths of others.

They were also impressed by the stunning views from the top of the mountain. Zara noted the ‘exquisite colours of Lake Abraham.’ However, they had few comments about wildlife sign and the forest communities we passed through. Perhaps the more physical aspects of the hike tended to override a focus on their more immediate hiking environment. Maia did mention ‘seeing many fossils in the rocks’ at the top of Coral Ridge. Also, it was obvious that Kai really enjoyed his close and intimate encounter with the golden-mantled ground squirrel. I think they all sensed the unique wilderness setting we were in for most of the day – extraordinarily beautiful and far away from other people. However, they may not have consciously thought about this, as a special thing to be embraced and appreciated in its own right. One feeling we all shared was that this adventure was definitely something we wanted to do again, especially with family and special friends.