To its credit, LLB Council recently passed a motion to postpone the re-zoning decision “to allow Administration to bring forward options for accommodating the environmentally sensitive areas as well as the new development.” However, we remain concerned that accommodating residential development near the Garner Orchid Fen will bring very intensive pressures harmful to the fen.

Garner Orchid Fen was established in 2004 as a Natural Area because of the vision of a dedicated naturalist and former Mayor of Lac La Biche, the late Tom Maccagno. These delicate groundwater-fed forested wetlands have a unique beauty and the rare opportunity to see 11 distinct Alberta orchid species. Since 2011, AWA has organized an annual June hike into Garner Orchid Fen, introducing the fascinating orchid-rich wetlands to many Albertans.

Lac La Biche County Council has been asked to rezone 88 acres of land east of the Fen from Agricultural to Estate Residential. Councillors recently voted to postpone their decision, which creates an opportunity for Albertans to ask that they use their land use powers for stronger long-term protection of this sensitive and significant Natural Area.

Please write Lac La Biche County Mayor Aurel Langevin (aurel.langevin@laclabichecounty.com) and ask that your letter be distributed to other Council members and County staff. And please copy AWA at ccampbell@abwild.ca.

Thank you for taking action! 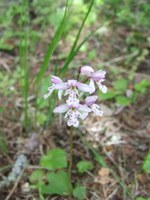