The federal government is officially three years late on producing an action plan to recover threatened westslope cutthroat trout. Documents recently obtained under an Access to Information request by Alberta Wilderness Association (AWA) and Timberwolf Wilderness Society suggest that the federal government does not plan on publishing a proposed action plan until late 2019 at the earliest. The groups confirmed that at least one population has gone extinct during the past three years, with the remaining populations in jeopardy and at great risk for extinction.

“We have enough evidence to suggest the federal government has had an action plan completed for some time, yet a mire of bureaucratic processes and internal reviews within the department means they don’t even plan on publishing the plan until late 2019,” said aquatic ecologist Dave Mayhood of Timberwolf Wilderness Society. “In the meantime, we have had confirmation that one population – in Evan-Thomas Creek – has gone extinct. Without immediate recovery efforts, others are likely to follow.”

“We know that more habitat needs to be protected in order to recover westslope cutthroat trout. Our access to information request reveals a troubling suggestion that critical habitat protection is being stalled with opposition from Alberta’s forestry division,” said Joanna Skrajny, AWA Conservation Specialist. “This goes against the fact under the Species at Risk Act, socio-economic concerns are not allowed to influence the identification of critical habitat.”

Westslope cutthroat trout in Alberta were first scientifically characterized as at serious risk in 2000, were formally assessed as Threatened by the Committee on the Status of Endangered Wildlife in Canada (COSEWIC) in 2006, and were listed as ‘Threatened’ in 2009 provincially and March 2013 federally. The remaining populations are small, restricted to short lengths of stream or a few small mountain lakes. They are highly vulnerable to random catastrophic events such as floods, droughts and whirling disease, and ongoing habitat damage from roads, cutblocks and off highway vehicles. Critically, most are exposed to rainbow trout that can hybridize them out of existence. Immediate action is required to recover them. 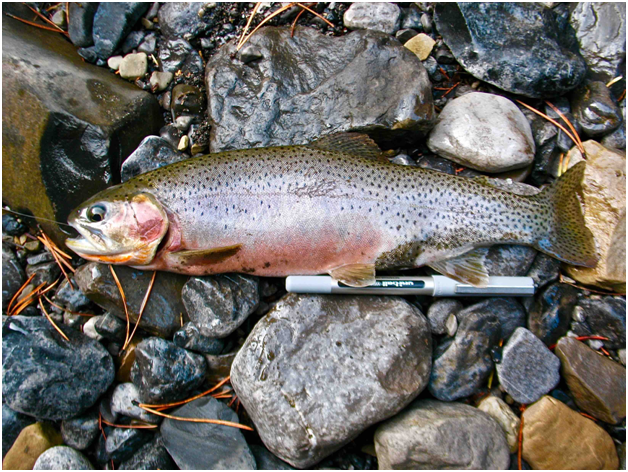 The last known representative of the protected Evan-Thomas Creek stock of westslope cutthroat trout, and possibly the last known representative of the Kananaskis Valley population of that species, specimen #20150923-1517 was captured and released 23 September 2015. Sampling in 2016, and intensive sampling in 2017, found zero cutthroat trout in this stream. 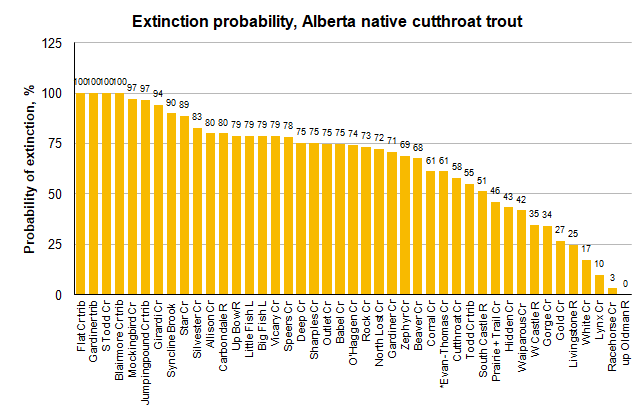 Most of the few remaining examples of native, unhybridized or lightly hybridized populations of native cutthroat trout in Alberta have a better than even chance of going extinct over the next 40 trout generations (about 120-200 years) due to small population size alone. Most of those are doomed to certain extinction even sooner because they are exposed to hybridization from non-native rainbow trout. One isolated stock, marked (*), has already gone extinct since the federal Recovery Strategy was released in 2014.