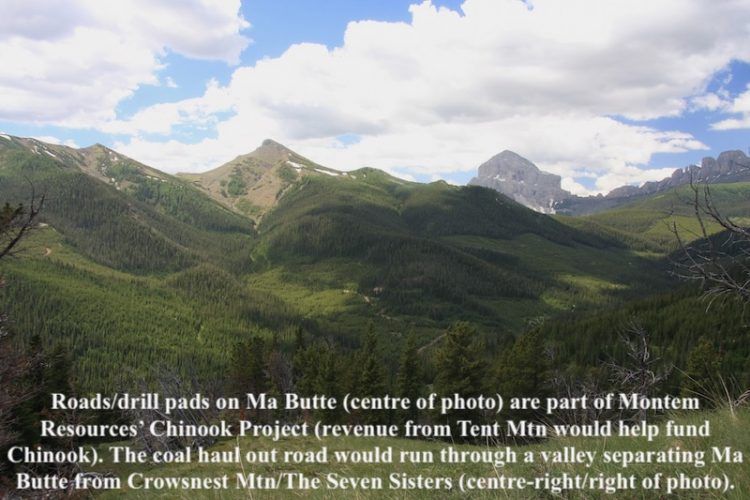 AWA was among the first handful of organizations (along with MP Heather McPherson) to request a federal assessment of Tent Mountain. AWA has as many reasons for applauding Minister Wilkinson’s decision as there were designation requests. Three reasons are highlighted here. First, we thought it was absurd for Montem to suggest that the environmental impact assessment Coleman Collieries submitted in 1974 for Tent Mountain should suffice today. I’m serious… Montem tried to persuade the Alberta Energy Regulator that a 47-year old environmental impact assessment should be accepted as the basis for a Tent Mountain assessment. Montem told the AER that the company had “determined that the scope of the EIA data gathering, assessment and mitigation development was comprehensive.” Chutzpah is one term that comes to mind in summarizing Montem’s position.

Second, we thought a purely provincial assessment of the project would neglect the various transboundary dimensions of the Tent Mountain project. In our submission to Minister Wilkinson, we identified the regional nature of the grizzly bear population, the traditional interests of the Ktunaxa First Nation in the Crowsnest Pass region, and the possible downstream water quality effects. We did so to make the case that these interprovincial/transboundary dimensions of the project demanded a federal assessment.

It’s fair to suggest that Montem Resources is struggling financially. Montem was listed on the Australian Securities Exchange in September 2020 for AUD$0.25 per share. When the Australian market opened this evening in our Mountain Daylight Time Zone the per share price of Montem was 3 cents per share. It has lost 88 percent of its value in the past nine months. In the aftermath of the Grassy Mountain decision, Acorn Capital dumped all of its 14,418,463 Montem Resources shares. Acorn lost $1.64 million of the $2.02 million it had invested in Montem. This self-described “specialist investment manager in emerging Australian companies” has lost its taste for how Montem is emerging of late.

Minister Wilkinson’s decision derails Montem’s timelines for the Tent Mountain project. In April 2021 Montem reported at its Annual General Meeting that it planned to make its first coal shipments in 2023. From my reading of information from the Impact Assessment Agency, it could take four years or more for a federal review panel assessment to be completed.

Does the good news about a federal assessment of Tent Mountain mean that we have snuffed out the threat of coal mining along the Eastern Slopes? No. Soon I’ll share some thoughts with you about how we can sustain the pressure that has improved the prospects of a sustainable future for this iconic Canadian landscape.

PS – I hope you’ll congratulate the two federal politicians who were instrumental in the Tent Mountain designation decision: