Rinse and repeat: Another proposed revision of Alberta’s parks legislation 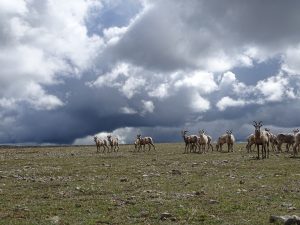 Close your eyes and picture your favourite provincial park. What do you see?

For me, that park is Writing-on-Stone in southeast Alberta. I can hear the din of crickets in tall grass and the whispers of the wind eroding sandstone pillars. I see its lush riverside pathways shaded by arching willows. I appreciate the culture and history of that special place; warmth…that’s the feeling I’m left with.

Now imagine that the buzz and hum of insects is drowned out by the squeal of tires from a nearby racetrack; there, stands of sage brush and blue grama grass are replaced by fields of noxious leafy spurge; once vibrant cliff ledges packed with chattering swallows and nesting hawks now lie empty, abandoned for a more tranquil setting. While such shifts may seem extraordinary or even impossible to imagine, they are the types of changes that our provincial parks system could see with even subtle shifts in system’s mandate or management regime is changed in inhospitable ways.

This article addresses critically some of the potential changes we may see coming to parks legislation. One of the pillars of the UCP platform during the 2019 election was a promise to “modernize” parks legislation and all signs indicate the government intends to keep this promise. This suspicion is fuelled by the summer/fall sitting of the legislature; at its conclusion the government announced that it had already fulfilled 58 of the 375 commitments it claimed it made during the campaign.

So, if changes to the Parks Act will be coming down the pike, what will it mean to “modernize” Alberta’s parks? What can we expect out of a potential review? Since the government hasn’t told us what acts they will consider changing, at this point in time we’re left to start with understanding the legislative landscape of Alberta’s parks system, what it currently accomplishes, and what is potentially at stake with a review.

The lay of the land

The Provincial Parks and Protected Areas Act was first introduced in 1930 and was Alberta’s first legal lever for establishing protected areas. Despite turning 90 this year, it hasn’t been left in some corner to collect dust. Another Parks Act was drafted in the 1950s, amended in the 1960s to include wilderness and natural areas, and has since been revised continually to meet our evolving knowledge of ecosystem management. With numerous updates and revisions to parks legislation over the years, the call for “modernizing” underestimates how the Act has evolved.

Today, Alberta’s parks legislation consists of three major acts: the Parks Act, Wilderness Areas, Ecological Reserves, Natural Areas and Heritage Rangelands Act (WAERNAHR), and the Willmore Wilderness Park Act. Together, the acts have established Alberta’s wide variety of protected areas, everything from strict protection (Wilderness Areas) to more recreationally friendly spaces (Provincial Recreation Areas). This underlines that not all “parks” are created equal in the level of protection they offer. The deliberate complexity of our current system accommodates regions that require more intensive ecosystem management, those that can allow more human use and enjoyment, and everything in between.

The Acts flesh out the answers to key questions such as: what is the purpose of protected areas? What level of wilderness protection does each designation offer? How will the area be managed to achieve conservation? Are roads allowed or foot access only? Are you allowed to hunt, fish, bike, boat or camp? In other words, they direct activities that have bearing on the ecological integrity of a protected area and how it will realize its conservation outcomes.

Since amendments to Acts require debate in the legislature, they are in the public eye and may invite controversy if opposition political parties and/or the media raise questions. Regulatory changes, which the law authorizes governments to make, don’t require public debate. Jason Unger, Executive Director of the Environmental Law Centre, explained that regulations are typically created “in the black box of government.” Since it’s a box that’s closed to public view, it’s tempting for governments of all political stripes to try to make significant, controversial changes by regulation, rather than by legislation. This is why we should be attentive to and wary of any government attempt to move something important, like protective status, out of an act and into a regulation. We’ll revisit this later.

Like something out of Bill Murray’s movie Groundhog Day, it feels like we’re destined to relive the proposed remodelling of parks legislation over and over and over again. It was only a decade ago that the Stelmach government introduced the infamous Bill 29, which proposed to turn Alberta’s current suite of protected areas into two categories: provincial parks and heritage rangelands. This bill was panned for a number of important reasons.

Bill 29 would have consolidated two important acts (Provincial Parks Act and WAERNAHR), erasing the important distinctions between seven types of protected areas and the activities permitted within them. Everything not considered a Heritage Rangeland – a designation for managing grazing on native grasslands – would be classified as a provincial park. Designations such as wilderness areas, ecological reserves and natural areas would have been eliminated.

Then, a zoning system would have established permissible and prohibited park activities. Parks would be classified into one of four zones. At the time of the proposal, the details of these zones, and permissible activities therein, were not published. Zoning system details would have come through provincial regulations. The Minister would essentially have had discretion with respect to decisions regarding: protective status, park access, recreation types, and where industrial dispositions could or could not go.

Bill 29 also proposed to use delegated administrative organizations for recreational trails. Reduced management costs would cut government spending – a motive that’s dear to the heart of the current      government.      This would have opened the door to privatization in parks and protected areas. The environmental sector criticized this proposal for its potential to erode park conservation values and remove public resources from public control.

Thankfully, Bill 29 was stopped dead in its tracks, one of few instances where a bill was pulled due to clear and unyielding public opposition.

The government’s commitments to economic growth, business, tourism, and fewer regulations also may have worrisome implications for the substance of “modernization.”

Travel Alberta and the Ministry of Economic Development, Trade and Tourism recently announced their plan to grow provincial tourism revenues to $20 billion by the year 2030, more than double the amount the tourism sector currently generates. This proposed growth likely has important implications for protected areas, given that Alberta’s parks are existing focal points for tourism and highly sought-after destinations.

With proposed tourism nodes already written into Alberta’s regional plans, we’re expecting new developments to start cropping up in parts of Kananaskis, Crowsnest Pass, Bighorn, Lakeland, and even in the badlands. While tourism can bring economic diversification to rural communities, any proposed development within or adjacent to protected areas will need significant vetting to ensure we aren’t treading where we shouldn’t. Habitat, headwaters and species at-risk need to remain as the core values of our protected areas. They must not be sacrificed when attempting to balance environmental protection with tourism and recreation opportunities.

Under the lens of recreation ecology, the impacts of outdoor recreation on landscapes, habitats and species have been well-documented. From literature and observation, we know that recreation can lead to decreased water quality, introduction of invasive species, habitat fragmentation, changes to wildlife behavior, and wildlife displacement. Frontcountry sites feel the brunt of the impacts, from the intensification of commercial sites on roadsides, the introduction of surfaced trails and campsites, the increased likelihood of human-wildlife interactions, and growing demand for local resources. The backcountry isn’t immune either. Luxury backcountry huts can lead to overcrowding within undermanaged areas, and with the increasing popularity of e-bikes, we’re also seeing higher intensity disturbance travelling further into the backcountry.

Despite tourism’s noticeable footprint on the landscape, it is important to facilitating a personal connection to the land and generating the political and economic will to support protection. However, tourism’s net positive benefits can only be unlocked when new developments are ecologically sustainable, something that is easier said than done. Scale, timing and seasonality, recreation types, and amount of use permitted, among many other ecological factors influence the sustainability of an activity. Estimating sustainability often can’t be determined without an in-depth environmental assessment. With so much diversity between parks and protected areas, there is no general consensus on what constitutes eco-tourism within them. Contrary to what marketers would have you believe, an activity does not qualify as eco-tourism simply by virtue of being in the mountains…

The Alberta government is focused on ways to cut spending, shift costs onto other governments or actors, and promote economic growth. Given this focus it’s not hard to imagine a rewritten parks act that invites commercialization within protected areas. This could mean relaxing the rules over new developments and recreation types, or allowing greater extraction of resources in or adjacent to protected areas (see Shaun Fluker’s article on the Fortress Mountain Resort water license for an example of what’s already happening adjacent to two provincial parks).

At the end of the day, there are a lot of unknowns in how this platform commitment to modernization will shape up. Provisions have already been made in the provincial budget for a parks legislative review, so we know that changes will be proposed soon enough. For now, take the time to consider the history of Alberta’s parks legislation, what our parks system currently achieves, and what Alberta’s protected areas mean to you. My hope is that whatever revision the government ultimately proposes does not dilute the protection that’s already in place and that any proposed changes happen transparently and with opportunity for dialogue on the management of our favourite wilderness spaces.