Reflections on Wiener Stick Parking Lots, Growing Up, and the War on the Environment 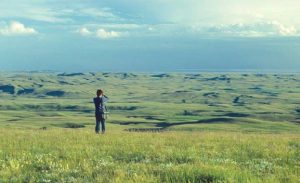 I grew up on the banks of the “River” Rom on the east side of London in the United Kingdom. It was a place where kids could get closer to nature. Humans need all kinds of natural and recreation spaces and we need more, not less, of them. If COVID-19 has taught me anything, it is the value of the natural world and how little is available for us to get out into without crowding out each other or crowding out the wild things that matter most to us lovers of wild spaces.

As a young biologist working with Alberta Parks, I might have been inclined to agree with the current policy to delist dozens of protected spaces. We would sometimes refer disparagingly to several of these places as “wiener stick parking lots.” As I have matured, I have come to realize the importance of those bits of nature and outdoor recreation spaces – they are the kinds of spots where families have gathered and kids played close to nature. They also have been convenient for a quick overnight on a family road trip to even wilder spaces. I no longer disparage the “wiener stick parking lots.”

One hundred and seventy-five sites are slated for full closure or removal from the system. Not all the lands on the recreation and conservation areas chopping block are simple open recreation space. Some also provide access to some of the finest natural spaces on the planet or have special meaning in one way or another. At least 102 of the sites occur in lands designated as Environmentally Significant Areas of provincial or greater significance. These jewels and waysides are scattered across all of Alberta’s natural regions – Boreal Forest, Foothills, Grassland, Parkland and Rocky Mountains. Most occur in the Foothills and Rocky Mountains where many Albertans focus their recreation activities.

I have been fortunate to visit somewhere between a third and a half of these areas that will be lost, either as a kid out on a weekend fishing trip with my dad or later as father, with my daughter, exploring the nooks and crannies of Alberta’s natural regions as we searched for areas of environmental significance and mini-adventures. Just last spring, I was at the North Fork Provincial Recreation Area observing nesting barred owls with my granddaughter. North Fork will be delisted from the parks system.

Featured on maps and tourist information pamphlets, Lundbreck Falls Provincial Recreation Area was one of my earliest memories of Alberta after we came from England. Cataract Creek, Dutch, Oldman River North, Racehorse – all staging areas to access magnificent fishing in the wild streams that fed my youth. Jumping Pound, Sibbald Lake and numerous sites along the Highwood River now in Kananaskis Country all the way to the junction with the Bow River supplied areas for my first self-sufficient camping and fishing with my best friend in my early teens. These sites will be stripped of their protected status.

The world’s most extensive rough fescue grasslands occur across from Little Fish Lake Provincial Park east of Drumheller. The lake hosts a diversity of nesting birds, including endangered piping plover. The campground sits next to this natural wonder. Since the late 1960s, I have enjoyed many a fine day reveling in the prairie bell chorus of western meadowlarks, Sprague’s pipits, and Baird’s sparrows in the tussocky grasses; or photographing nesting avocets and terns. My daughter and granddaughter have followed in those footsteps. As Lindsey pointed out earlier in this issue, Little Fish Lake Provincial Park will be shuttered too.

Kinbrook Island Provincial Park contains offshore islands that support colonial nesting birds of conservation concern including American white pelican, great blue heron, and Caspian tern.
Bullshead Reservoir and Michelle lie at the edge of the most gorgeous grassland country in southeast Alberta, part of one of a handful of large, relatively intact blocks (5,000 square kilometres) of native habitats in the Northern Glaciated Plains.

JJ Collett Natural Area has some wonderful, but endangered, Central Parkland habitat just steps off the QEII highway between Edmonton and Calgary.
Maycroft Provincial Recreation Area was the site of the Oldman Dam concert featuring Ian Tyson, Gordon Lightfoot, and David Suzuki. It attracted thousands of Albertans to the banks of the Oldman River and the foot of the magnificent Whaleback Ridge.

The memories and the thought of closure prompt a range of emotions from sadness to rage. It is important to turn that anger into something productive. We have to be in this conservation game for the long haul. It is a marathon not a sprint. Governments come and go but, fortunately, the conservation crowd persists.

There is a disconnect between what Albertans say they value in polls going back to the 1980s and how the government’s work proceeds. Recent announcements to relax the environmental monitoring and reporting for the oil and gas industry, the termination of the Coal Policy (in place since the Lougheed years), the ongoing sale of Public Lands without public consultation, and the removal or closure of parks and recreation areas all send a strong signal that Alberta continues to wage a war on its own environment.

I have grown up a lot since I was a kid fishing on the banks of the Oldman River or a young biologist who hadn’t figured out what was truly valuable. I hope this government will mature and find its way to a more sustainable future. I have written to the government, objecting strenuously to these moves. I urge more Albertans to follow the Alberta Wilderness Association’s leadership and express their concerns and support for more protection for the protected places that have made their lives a whole lot better.