Ready to Ramp Up the Pressure on Grassy Mtn?

June 2021: ’Tis The Season To Pressure Ottawa on the Grassy Mtn Coal Project 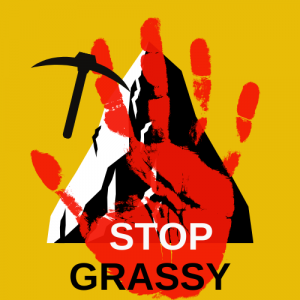 The Joint Review Panel on the Grassy Mountain Coal Project is scheduled to submit its report to the federal Minister of Environment and Climate Change by no later than June 18, 2021. That’s less than one month away and it’s possible the JRP report could land on Minister Wilkinson’s desk before then.

Another clock starts ticking the day the Minister receives the JRP’s report. The Minister will then have up to 150 days (five months) to issue a Decision Statement about the project. This means that a Decision Statement about Grassy Mountain could be released at around the same time that Alberta’s Coal Consultation Committee is due to submit its report to Energy Minister Sonya Savage – November 15, 2021.

AWA thinks it’s imperative to start to organize now for the day when the JRP report is submitted to the Minister. We want to do what we can to be part of a flood of emails, phone calls, letters, and faxes Minister Wilkinson will receive within hours/days of the release of the JRP report.

In doing so we will reinforce the “No to Grassy” message that thousands of Canadians gave to the Joint Review Panel during its hearings. Thousands? Absolutely. More than 4,400 individuals left comments about the Grassy Coal Project on the Impact Assessment Agency’s public registry. A stunning 98 percent of those comments came from people opposed to Grassy Mountain. Only 69 of 4,411 comments supported the project. Grassy Mountain, in AWA’s mind, is clearly an issue where public and scientific opinion walk hand in hand.

In the weeks ahead here’s what I hope you’ll do. Start with five of your family and friends, talk to them about the madness of Grassy Mountain, and get them to commit to contacting Minister Wilkinson when the JRP report is released. Urge them to urge Minister Wilkinson to recommend to his cabinet colleagues that the significant adverse environmental effects of Grassy Mountain are not justified. The federal government must refuse to approve this project. It may be even better if you can reach out to people outside of Alberta to join you. Why? If we can show the Minister that Grassy matters to Canadians generally this should increase the political/electoral incentive for the Liberal government to reject this project.

Encourage your five contacts to do exactly the same thing. If each of them can convince five people to join us, and their contacts follow their lead, we can help the opposition to Grassy Mountain grow exponentially.

Below you will find your Conservation Director’s best guess regarding some of the important details about the process that will follow the release of the Joint Review Panel report.
Here are the contact details for Environment and Climate Change Canada Minister Wilkinson:

As mentioned above, the Joint Review Panel on the Grassy Mountain Coal Project likely will submit its report to the federal Minister of Environment and Climate Change by no later than June 18, 2021. When Minister Wilkinson receives the JRP’s report he will have up to 150 days (five months) to issue a Decision Statement about the project. What does the process between receiving the report and issuing the government’s Decision Statement look like?

What’s the Division of Labour/Responsibility Between The Minister and The Federal Cabinet?

Under section 52(1) of the Canadian Environmental Assessment Act, 2012, Minister Wilkinson must decide if Grassy Mountain is “likely to cause significant adverse environmental effects.” That decision should take into account whatever mitigation measures he considers are appropriate.

If Minister Wilkinson decides that Grassy Mountain is likely to cause significant adverse environmental effects, he must then refer the project to the federal cabinet (the Governor in Council). The cabinet then must decide if those significant adverse environmental effects “are justified in the circumstances.” This is outlined in section 52(2) of the Act.

If the Minister doesn’t conclude that Grassy will cause significant adverse environmental effects then, as I understand it, the federal cabinet will not be involved in the decision process.

Minister Wilkinson, whether or not the matter is referred to cabinet, will release his Decision Statement within that 150 day window.

What Will the Decision Statement Say?

If the cabinet decides there are significant adverse environmental effects that are not justified in the circumstances, then Minister Wilkinson’s Decision Statement will reject the project.

If the cabinet decides that such significant effects are justified then the Decision Statement will approve Grassy Mountain. However, this approval likely would come with conditions. As section 54(1)(b) of the Act states, this approval must include “any conditions that are established under section 53 in relation to the designated project and that must be complied with by the proponent.”

Will A Decision Statement Be Issued by mid-November?

Will There Be More Consultation With First Nations Within the 150 Day Timeline from Report to Decision Statement?

I’m not sure what the answer is to this important question. I asked several lawyers familiar with the CEAA process and they couldn’t give me a definitive answer. Gitxaala Nation v. Canada, 2016 FCA 167 was the case that became instrumental to the Trudeau government’s decision to reject Enbridge’s Northern Gateway Pipeline Project in 2016. The Harper government had approved the JRP report for that project and, with it, the project. But, First Nations and others took that approval to court.

In Gitxaala Nation v. Canada the Federal Court of Appeal considered fourteen applications for judicial review of the Harper government’s regulatory approvals for Northern Gateway/the JRP report. The Federal Court of Appeal quashed the approvals based on one failing – the failure to execute well the Crown’s duty to consult First Nations during Phase IV of the consultation framework. Phase IV referred to the time period between the release of the Review Panel report and the Decision Statement.

I’m curious to know whether such a “Phase IV” consultation will be owed to Treaty 7 First Nations as well as the Ktunaxa Nation and the Shuswap Indian Band.

Stay well everyone…and get ready to get engaged again,