“Optimizing” Parks? Many questions, no answers… so far 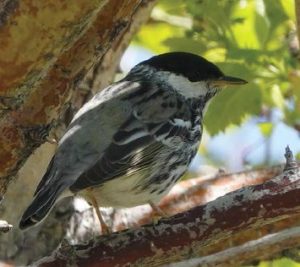 Like many Albertans, we are avid outdoor enthusiasts. We camp, watch wildlife, hike, cycle and cross-country ski – in provincial parks, national parks, and other public spaces.
So, we were shocked when the Alberta Government announced it was “optimizing” parks by removing some from the parks system and privatizing the management of many others through new partnerships.

Two parks on the “optimizing” list are Kinbrook Island and nearby Tillebrook in the Brooks area. We have been lucky enough to spend time at these parks over the last few years, including while helping out with the Brooks May Species Bird Count.

Both parks may superficially look like just busy campsites, which they are, especially popular with local residents. But they are also much more than that. Every spring, when bird migration is at its peak, the weather is often variable – a few days of storm followed by calmer weather. On those stormy days, it’s essential for migrant birds to quickly find refuge – shelter and food – until conditions allow them to resume their arduous journey to their boreal forest breeding grounds.

Across the (mostly) treeless prairies of southern Alberta, Kinbrook Island and Tillebrook are sought-out oases in a storm for exhausted migrants. From a bird’s-eye view these two parks literally stand out as safe havens and critical feeding stopovers.

In poor weather, hundreds and even thousands of birds touch down to refuel for the long flight north. We have witnessed huge migrant “fall-outs” at these parks – warblers, sparrows, thrushes, flycatchers, vireos – sometimes many species in one shrub or tree. Depending on conditions they may stay for a few hours or a few days to wait for the weather to improve. When it does they take flight, often at night.

These critical stopovers must provide migrants with the appropriate food and shelter, and for many songbirds that means trees. Both Tillebrook and Kinbrook Island have mature stands of balsam poplar, supplemented by plantings of conifers and a variety of other trees and shrubs. For waterfowl, Kinbrook Island Provincial Park also provides open water (Lake Newell), wetlands, ponds, and sloughs. It also offers prairie fields suited to grassland birds.

Lake Newell is a large man-made reservoir filled in 1914 through the construction of the Bassano Dam (northwest of Kinbrook Island). The Bassano Dam diverts water from the Bow River and routes it through a canal into Lake Newell, which supplies most of the County of Newell with water for irrigation, drinking, and recreation.

The Kinbrook marsh complex (200 hectares), a North American Waterfowl Management Plan Project, was built by a partnership of the Eastern Irrigation District (EID), Ducks Unlimited, and Alberta Fish and Wildlife. The project isolated two shallow bays from Lake Newell by a system of three dikes. This separation prevents marsh water levels from being impacted by irrigation draw-downs of Lake Newell.

Kinbrook Island, which is in Lake Newell, became a provincial park in 1951 after the Brooks Kinsmen Club got a recreational lease for the island. The park was enlarged to include all the islands in Lake Newell to protect nesting sites for pelicans, cormorants, geese, and numerous other migratory birds. Significantly, Lake Newell and nearby Kitsim Reservoir are nationally designated as an Important Bird Area (IBA) [see Note/sidebar].

The local community has invested in and protected this area for decades. Wildfowl depend on the marshlands and open water. Songbirds stake their lives on the biodiversity of these natural areas during migration. These investments and trusts should not be broken by the government proposal to take these provincial parks and natural areas out of the parks system.

Our concerns include: under proposed new partnerships, will these sites/areas removed from the park system also lose the environmental protections currently provided by provincial parks? The new partner’s main focus at Kinbrook Island would be management of facilities (including campgrounds, day use areas, boat launches, fishing, beach access, playgrounds, and the concession). Who will manage and protect the environmentally sensitive and natural areas for the migrant and breeding birds and other wildlife? Will this public duty be privatized to the new partner? We have asked the Minister this and other related questions. So far, no answers.

Meanwhile, we must keep up our pressure on government MLAs to change their minds on this decision to remove so many parks and natural areas from the park system. Please contact your MLA (again!) and let them know your concerns.

John and Ena have appreciated wildlife and wild places all their lives, starting in East Africa and Scotland individually, then together in Canada and the rest of our beautiful planet.

The site is significant for a population of Great Plains Toad (red-listed in Alberta) and is also possibly the only site in Canada for Water Hyssop and one of only three known Alberta locations for Slender Mouse-ear Cress.

Over 1,000 American White Pelicans have been recorded here, which is about one percent of the national population. In 1976, 6,091 Ring-billed Gull nests were recorded on Lake Newell which would have been more than one percent of this species’ national population. Since then, Ring-billed Gull numbers have decreased (4,272 nests in 1998) but the numbers there are still impressive. A 1998 survey of Lake Newell and Kitsim Reservoir found these nesting species: California Gull (760 nests), American White Pelican (21 nests), Double-crested Cormorant (1,324 nests) and Caspian Tern (74 nests). Eared Grebe, Great Blue Heron and Common Tern also nest here.

Shorebirds use the area during migration, in close to globally significant numbers, such as 1,300 Black-bellied Plovers (as much as 0.9 percent of the North American population) recorded in 1998. Other species with notable occurrences here are: Whimbrel, Sprague’s Pipit and Chestnut-collared Longspur. The lakes are ideal staging areas for many other bird species, e.g., Western Grebes (more than 500 summering) and waterfowl (over 3,000 a day in spring and fall).