You can download a pdf of the article here

I wanted to be a biologist. That was one of my boyhood answers to the question: “Ian, what do you want to be when you grow up?” If I had taken that path I hope I would have ended up like Dr. Michael Sullivan. Michael is a fisheries science specialist with the provincial government, an adjunct professor in the University of Alberta’s Biological Sciences department, and a key figure in the efforts to help recover Alberta’s native trout populations. His lecture, “Being Responsible & Realistic: A Vision for Alberta’s East Slope Trout Streams,” was captivating and inspirational. His passion for his vocation, for the fish and fish habitats he studies, was on display throughout the evening.

As his introductory remarks underlined, he’s also an adventurer and devoted father. That combination has led him to take his daughter Sierra, a future PhD graduate in Zoology, on wilderness trips where occasionally they would be “doing things that you don’t show mom.”

The trips Michael described, such as spending five weeks in the backcountry with Sierra, were trips that, when it came to the fish the Sullivans love to study, literally turned back the clock. “We would see the types of fish our grandparents probably saw,” he said. For these two fisheries scientists then, these backcountry trips were much more than just fabulous adventures. They were trips that changed their impressions profoundly; to take a trip into an isolated corner of the backcountry “reset our baseline that this is probably what good is supposed to look like.”

Their travels taught them that, in undisturbed settings, Alberta’s native trout thrive. They’re big, they’re easy to see…even in low productivity, cold, silty waters. Even in far from ideal habitats these trout are big and abundant as long as there’s nothing else threatening them.

Even those who are only vaguely familiar with the state of Alberta’s trout fisheries should realize that what the Sullivans experienced in the wilderness is far from the norm in today’s Alberta. In less than a generation bull trout plummeted from being the most common salmonid in Alberta’s streams to being a species-at-risk. Alberta’s Athabasca rainbow population has followed a similar trajectory. Labelled as Endangered in 2014 by the Committee on the Status of Endangered Wildlife in Canada (COSEWIC), the Athabasca rainbow population is estimated to have collapsed by more than 90 percent over only three generations (the last 15 years).

What were once plentiful game fish are now species at risk. The plenty of the past, as seen in archival black and white photos such as those in the Glenbow Museum, seems like a fantasy to today’s biologists. “We’re dealing with dust,” in Michael’s words, “we’re dealing with bread crumbs left on the landscape.”

This history is tragic if you believe, as the audience for Dr. Sullivan’s lecture did, that healthy native trout populations are a tonic essential for the soul of Alberta. Michael evocatively described the wonder of autumn in the foothills and the opinion of his friends who have traveled to many of the world’s more exotic locales: “Nowhere else on the planet is as perfect as a foothills autumn in Alberta but without the trout in the pool there’s a hole torn in that picture.”

Michael’s vocation is to help craft a vision that will move us back towards the baseline, the “what good is supposed to look like,” he has witnessed in the wild. The ambition he shares with AWA is to make it more likely that my grandsons will have the opportunity to see the types of fish their great-grandparents often saw.

The challenge facing fisheries biologists today is to identify what we had, what we have now, and what’s responsible for the changes. What are the limiting factors responsible for the health of fish populations? To meet this challenge and to answer this question, he and his colleagues inside and outside of government build and apply models in order to identify what the most important limiting factors are. In order to identify the best hypothesis when it comes to identifying limiting factors, Michael talked affectionately about the “Joe Modeling Process,” an approach named after the internationally-renowned University of Alberta fisheries biologist, Joseph S. Nelson. Nelson published more than 100 scholarly articles over his career, wrote Fishes of the World, co-wrote (with Martin Paetz) The Fishes of Alberta, and served on COSEWIC for 26 years.

Once you’ve identified the most likely limiting factors you test them. Eliminate a limiting factor from the equation and study how the troubled fish population responds to its elimination. In the Berland River system, for example, the four limiting factors the Joe model identified were: angling, sediment, hanging culverts, and non-native rainbows. The government’s trout recovery program decided to channel the vast majority of its efforts here into completely eliminating one of the limiting factors – culverts. Accompanied with a considerable investment from oil and gas companies the government sought to, and succeeded in, eliminating the threats posed by hanging culverts. More than 300 culverts were taken out in order to re-establish fish habitat connectivity. But, fixing the habitat, supplying more quality accommodation for bull trout in the Berland system, didn’t produce the fish needed to use this improved environment. More than culverts were limiting the growth of the bull trout population there.

Michael didn’t say so explicitly but I thought his remarks inferred that angling pressure was the more important limiting factor in the case of the Berland. Angling pressure contributes vitally to two of the most noteworthy features of Alberta’s trout populations today: fish don’t get as big as they used to and fish today die younger than their predecessors. Fish don’t “not get old anymore” because of culverts that they can’t get through or because of silt. Certainly, silt harms the ability to reproduce and dims the survival chances of fry while culverts restrict fish population movements. But, his remarks suggested instead that angling pressure and angling restrictions are connected more closely to both the age and size of fish in Alberta’s waters. 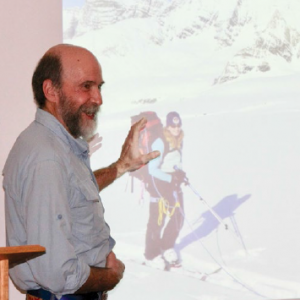 Michael Sullivan, AWA’s 2018 Martha Kostuch Lecturer. Judging by Michael’s look, he was in the midst of telling his audience about something he did on an adventure with his daughter Sierra that “you don’t show mom.”

He made this point in part by comparing government studies of the populations of mountain whitefish in the rivers flowing through Canmore and Jasper. These populations were compared over time and the relatively greater size and age of fish in Jasper appears positively correlated with the length of fishing seasons. The Canmore stretch of the Bow River was open to fishing in the autumn while the Jasper stretch of the Athabasca was closed to fishing in that season. Mountain whitefish didn’t get as old or as large in the Bow as they did in the Athabasca because the fishing season in the Bow was longer.

Here those who think that catch and release is definitely not a problem should take note. Michael outlined three angling behaviours in a catch and release fishery: immediate release, A photograph – then release, and illegal harvest. He then estimated the mortality rates associated with the two examples of catching and releasing fish. Depending on the heat of the day, those of us who immediately release the fish we catch likely kill up to five percent of our catch. If you photograph your catch before releasing it, you increase the mortality rate very significantly. An informal summer 2018 survey in Willmore found that 33 percent of the fish caught, photographed, and then released… died. The little time it takes to photograph a fish before releasing it greatly increases its chances of dying. And, given how low some populations – such as bull trout – are even very low incidences of illegal harvest can collapse a population.

If five to twenty percent of the fish taken in a catch and release fishery might die, fisheries scientists such as Dr. Sullivan can estimate how many anglers we can have on our streams in order to sustain the species subject to catch and release. His conclusion? Up to 20 to 30 hours of catch and release angling per hectare is sustainable. The problem, and it’s an existential one for Alberta’s trout populations, is that the average angling pressure is 270 hours per hectare. Angling pressure is roughly ten times the level that a fisheries scientist such as Michael Sullivan has concluded is sustainable.

Throughout the evening Michael suggested that, when it comes to resource management in Alberta, sharing is hard. What he meant by that is that, while we may value the presence of many attributes and activities on the land, it’s often impossible to have them all. In the context of Alberta’s trout, he suggested that forestry, fishing, and trout all are highly valued. But, trout cannot survive the cumulative effects of both forestry and fishing. If we want to restore the health of our native trout populations, we either have to reduce forestry – something that government and industry alike will oppose – or reduce angling pressure.

This message about the need to reduce angling pressure on native trout shouldn’t be seen as a pessimistic one. Alberta’s walleye fishery was offered as one exciting example of what Alberta’s native trout fisheries could look like in the future. By the 1990s the populations of walleye in road-accessible lakes had collapsed. Good science, well-informed anglers, and recovery regulations/walleye tags led to an impressive recovery in the walleye fishery. From collapse in the 1990s to arguably the best walleye fishing in North America today – that’s what the management focus on reducing angling pressure on walleye 25 years ago has delivered. Since the walleye recovery the government estimates that over $3 billion has been added to the Alberta economy.

Such an impressive fishery recovery in Alberta’s lakes is something that Michael believes can be duplicated in our streams for our native trout populations. But, it means we must find ways to reduce angling pressure. In the 1950s Alberta had many fish sanctuaries in the Eastern Slopes (for example, Racehorse and Dutch Creeks). Dr. Sullivan thinks that the sanctuary concept is one that managers could apply creatively to our native trout streams. Tags, area restrictions, time of day restrictions – they are all measures that could be used to reduce the angling pressure that today stands as likely the most significant limiting factor to the health of Alberta trout.

Michael Sullivan’s passion and optimism were inspirational. His lecture was as invigorating as the mountain streams in the Willmore he and his daughter waded through. Sharing often is difficult, not least when choices have to be made between highly valued activities and attributes. That is the situation we face now with respect to our economic dependence on forestry and our love of fishing and native trout. If he is right and we can only have two of those three, the choice comes down to whether it will be the fishing status quo or native trout (since government already has decided forestry will be one of the three). Here, as a fisherman who hopes to share this love with his grandchildren, I hope we will listen to Michael’s advice. Select a few watersheds, creatively apply the sanctuary concept, and see if the successes seen in Alberta’s lake fisheries can be replicated in our trout streams. The prize is one I’m willing to share for.