Click here for a pdf version of this tribute. 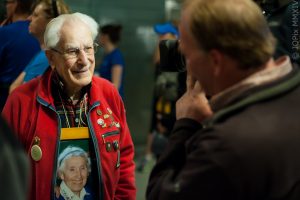 Too few indeed are those of us with intelligence, devotion, generosity, and humility. Richard Guy was one of that rare breed. I didn’t know Richard very well. Unlike close friends like Chic Scott, I came to appreciate these qualities in Richard from a distance – from his perennial participation in AWA’s Climb for Wilderness, from the comments people made about him during those occasions.

His intelligence was the trait I heard the least about, a silence I attribute to his humility. Mathematics was the British-born Richard’s vocation. He published many books and many more articles on mathematics, a subject he loved and taught at the University of Calgary since the 1960s.

One might also say that he exhibited his intelligence when, in 1937, he took the first steps to spending more than 70 years of his life with Nancy Louise Thirian. They loved dancing, they loved mountains. In 1940 they married and were life partners until Louise passed away here in Calgary in October 2010.

Devotion though is the better lens to use when it came to the relationship between Richard and Louise. When AWA’s Andrea Johancsik interviewed Richard before the 2017 Climb for Wilderness he described Louise as his inspiration when it came to the wilderness. Louise was his “wonderful companion for seventy years, the perfect person.” Anyone who saw Richard during a Climb for Wilderness will have seen him wearing a sign of his devotion to Louise – her photograph hung around his neck.

Devotion also described well Richard’s outlook on his vocation as well as the mountains that, like a magnet, attracted the Guys to Calgary from India in the early 1960s. This shared love of the mountains inspired Richard and Louise to attend dozens of the Alpine Club of Canada’s annual General Mountaineering camps.

But, when it came to the mountains and wilderness more generally, you can’t talk about Richard Guy without highlighting his generosity. His large donation to the Alpine Club of Canada, in memory of Louise, enabled the ACC to build the Louise and Richard Guy Hut on the Wapta Icefield. The fact the hut is a winter-only facility attests to the appreciation Richard and the ACC showed towards wilderness wildlife species. The hut is closed from spring through to the late fall because the area to the south of the hut is important grizzly bear habitat.

I witnessed Richard’s generosity every year at AWA’s Climb for Wilderness. For example, in 2014 when the Climb was held at the Calgary Tower, a 97-year old Richard Guy was AWA’s top individual fundraiser. He raised over $4,000 for our association (by the way, he climbed the tower twice that year…). And, that wasn’t the only year when Richard was the individual who raised the most money through the Climb for AWA. Not a tall man, Richard’s bright red jacket made him easy to spot every year at the Climb. If you got close enough you could read the text on his ever-present button: Peace is a Disarming Concept. So many of the most important issues for present and future generations were ones that Richard cared deeply about.

As a native Briton, I hope Richard would approve of me relying on the Oxford English Dictionary for my understanding of humility. Humility is the opposite of haughtiness; it describes a person who is unpretentious, who is not arrogant or disdainful towards others. Again, watching Richard at the Climb in the last decade of his life was where I believe I saw that quality on display. My memory of this is particularly strong from the 2018 Climb, when participants were tasked to climb the 1,188 stairs of the Bow Building in Calgary. On the 54th floor, where people gathered after their climbs, Richard spoke to dozens of participants. He had time for one and all.

It always was inspirational to see someone of Richard’s age climb those stairs in order to raise money to help AWA’s conservation work. I know my AWA colleagues and anyone who had the opportunity to know him will miss Richard deeply. We have lost a friend, an inspiration.

This planet will never have enough people with Richard’s qualities. In so many ways, he taught us well. When we lose a Richard Guy, we should mourn our loss but also commit to do better in our own lives.

For more on the life of this wonderful citizen see Chic Scott’s biography/remembrance of Richard Guy on the Alpine Club of Canada’s blog “Aspects.”

Alberta Wilderness Association, along with the Alpine Club of Canada and the University of Calgary Scholarship Endowment, was recognized as one of Richard’s favourite charities. We are grateful for his recognition and will be honoured to receive gifts in his memory.