AWA Letter on Motorized Trails in the Castle Parks

The Honourable Jason Nixon
Minister of Environment and Parks
By email: aep.minister@gov.ab.ca

Further to the Government of Alberta’s July 11, 2019 newsletter – Update on the Castle parks and adjacent public land, Alberta Wilderness Association (AWA) is writing to lend our support for the implementation of the final Castle Management Plan, in particular the completion of restoration plans and protective measures for threatened westslope cutthroat trout in critical habitat within the Castle Parks.

As one of many stakeholders representing a diverse group of interests and users, AWA participated in extensive consultation opportunities that led to the development of the Castle Parks Management Plan. The plan recognizes the Castle’s wilderness values, and its importance to Indigenous communities and recreationists. The consultation process facilitated productive discussions about the ecological and recreational values of the Castle and which activities were compatible with its protection and restoration.

The Castle Wilderness contains critical habitat for threatened westslope cutthroat trout and is recognized as core grizzly bear habitat. With numerous overlapping ecosystems in one relatively small area, the Castle Wilderness contains significant animal and plant species diversity and provides essential headwaters for the Oldman River basin. Throughout the past several decades, activities including oil and gas exploration and development, livestock grazing, clear-cut logging and high-impact recreation have caused substantial disturbance to the Castle[1].

It has been well-established in both scientific literature and reports produced by the Government of Alberta that motorized trails are incompatible with the Castle Parks, largely due to legal obligations to protect and restore westslope cutthroat trout critical habitat.

We look forward to your response and invite any opportunity for further discussion. 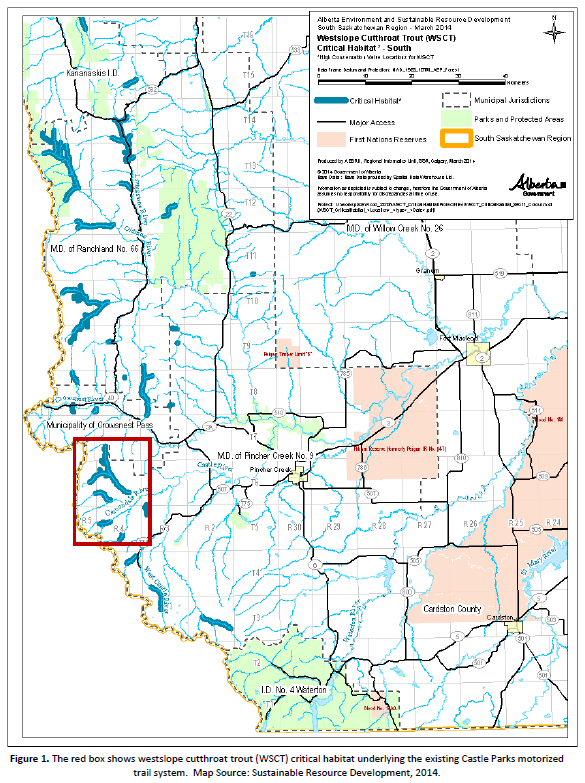