Another Story About Potatoes and Politics?: Native Grasslands Sold for $460,000 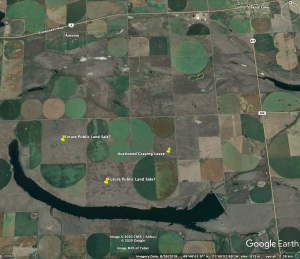 On March 31, 2020, the provincial government sold a quarter-section of native prairie in southern Alberta for $460,000. The parcel is located about 29 kilometres due east of Taber and 6 kilometres southwest of the hamlet of Grassy Lake. An Alberta company, 1709054 Alberta Ltd. owned by Louis Ypma, had a grazing lease on this land. The sale happened less than one month after Environment and Parks Minister Jason Nixon told a Postmedia columnist: “We are not selling any Crown or public land – period.”

AWA objected to the government’s decision to auction off these lands for various reasons. As AWA Director Cliff Wallis explained to Bob Weber of the Canadian Press: “Every piece of native prairie that we have left is precious. Temperate grasslands are one of the most rapidly disappearing habitats on the planet.” This point was underlined in a March 17, 2020 letter from AWA’s Nissa Petterson to Premier Kenney and his Minister of Environment and Parks. With less than two percent of Alberta’s native prairie grasslands protected, no further conversions of prairie to agricultural use should be entertained.

Wishful thinking describes well the public consultation about this sale, like that for the government’s agenda for parks and for the grazing fee changes announced last fall. In the case of this auction, the absence of any consultation underlines the absence of any certainty in the public record and mind about what public lands the province may sell and for what reasons.

Currently, the Minister of Environment and Parks has virtually unlimited discretion when it comes to the sale of public lands. Section 6 (2) of the Public Lands Administration Regulation states: “The Minister may, subject to the Act and regulations, sell public land by public auction, private sale or tender, on the terms and conditions the Minister considers appropriate and at a price not less than the fair value of the land.” (my emphasis)

Currently, there are approximately 12 sections of public land (7,680 acres) in the immediate vicinity of the Sherburne Lake Reservoir. We know sensitive and threatened species would like to call these lands home and therefore want the government’s assurance that these grazing lease lands will not be privatized.

In the accompanying Google Earth image, two of those 12 sections have been labelled “Future Public Land Sale?” The history of 1709054 Alberta Ltd., the company with grazing leases on those two sections, justifies the question of whether these grazing lease lands will be put up for sale in the future. It also justifies the recommendation criteria more substantive than “terms and conditions the Minister considers appropriate” must be incorporated into the Alberta’s Public Lands Administration Regulation.

Louis Ypma, the company’s owner, has had a longstanding interest in purchasing and/or trying to purchase public lands from the provincial government. In the December 2007 issue of WildLands Advocate, Joyce Hildebrand thoroughly and superbly detailed Ypma’s efforts to acquire public lands to convert to agricultural production. In 2004, Ypma negotiated a land exchange successfully with the Ministry of Sustainable Resource Development. His success came over the objections of Fish and Wildlife biologists. They objected to the land exchange because they didn’t believe Ypma’s lands offered sufficient wildlife resources.

In 2010, AWA’s Nigel Douglas discovered that through a private, secretive process Alberta was about to sell 25 sections of land (16,000 acres) near Bow Island to SLM Spud Farms Ltd. The Ypma family owned SLM Spud Farms. Legally, the proposed sale likely was untouchable since the Minister had almost unfettered discretion to decide what was “appropriate.”

Nigel’s discovery of “Potatogate” sparked a wide-ranging public outcry against this proposal. That outcry helped secure a promise from Alison Redford, a candidate to replace Ed Stelmach as leader of the Progressive Conservative party, to suspend the land sale if she was elected party leader. Soon after her victory, she canceled the land sale.

One foundation of a healthy democracy is the public’s belief that a government’s decisions are based on principles and clear criteria – not on whim or favouritism. We need stronger, clearer criteria for public lands sales in Alberta to reassure us that those sales are guided by more than whimsy or favouritism.

The Ypma family has developed important connections with Alberta’s governing conservative parties since 2011, the year of “Potatogate.” After donating $700 to the Progressive Conservatives in 2011, Louis Ypma didn’t give Premier Redford’s party a penny in 2012 (according to the Elections Alberta database, 2011 was the first year Louis Ypma made a donation to a provincial political party). This shouldn’t surprise in the aftermath of “Potatogate.” But, since 2013 Ypma has offered financial support to first, the Progressive Conservatives (2013 and in the 2015 provincial election), then the Wildrose Alliance (2016), and finally for Jason Kenney in the 2017 UCP leadership contest.

His political contributions (totaling $5,125 in those contests) have been equaled or exceeded by other members of the Ypma family starting with the 2017 UCP leadership election. Two other family members financially supported Jason Kenney in the UCP leadership race.

Most notably, five members of the family each donated $3,000 to help nominate Grant Hunter as the UCP candidate in Taber-Warner. The $15,000 the Ypma family donated to Hunter constituted 91 percent of his total nomination contributions. If you subtract the $1,000 Hunter contributed to his own nomination that percentage rises to 97 percent. In addition to the Ypmas and Hunter, only one other person contributed to Hunter’s nomination.

Since the Hunter campaign transferred the lion’s share of the nomination contest proceeds to the Taber-Warner UCP constituency association, the Ypma family effectively contributed nearly 42 percent of the constituency association’s total annual revenue in 2018. Grant Hunter currently serves as the Associate Minister of Red Tape Reduction.

Am I mad to think the financial support the Ypma family gave to the UCP may have influenced the decision to auction this quarter-section? Maybe. But, that’s where I’m left when the Minister won’t explain to AWA why scarce, native grasslands were privatized. Here, AWA is not alone. When The Western Producer reported on the land sale Barb Glen wrote: “The Western Producer did not receive a reply to queries made to Nixon’s office.” Nor did she get any comment about the sale from Lyle Ypma, one of Louis’s sons. Such silences only strengthen my suspicion that political favouritism is part of this story. The silences also strengthen the need for regulatory reform.