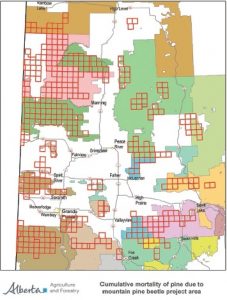 Thanks to a February 2020 presentation by the Alberta government’s ‘Forest Health and Adaptation’ Director, I learned of two important conclusions of government-commissioned mountain pine beetle research. First, Alberta mountain pine beetle impacts have been less than projected. Second, the preferred way to reduce the extent of the pine beetle outbreak extent is by selective identification and removal, not by clearcuts.

Mountain pine beetles (MPB) are native insects that are part of natural disturbance cycles in Alberta southern foothills forests, attacking mainly larger diameter (therefore older) pines. In 2005/2006 and 2009, there were extensive, climate-change-assisted pine beetle flights from B.C. into Alberta’s central and northern foothills. As Burke, Bohlmann, and Carroll wrote in Ecosphere, because these higher latitude lodgepole pine forests had not co-evolved with the beetle, this outbreak was seen as a threat to older lodgepole pine stands, the main conifer for commercial timber supply in those regions. The beetles were also viewed as a novel potential threat to boreal jack pine forests in eastern Alberta and potentially across Canada.

At the time, all agreed the surge cut levels were unsustainable from a long-term timber supply perspective; likewise, all agreed that AAC levels would have to ‘fall down’ below what they would otherwise have been without surge cuts. AWA also was convinced that the surge clearcuts were worse for forest biodiversity than the beetle outbreak itself. They were especially inappropriate in species at risk habitat such as the ranges of threatened woodland caribou. Therefore, AWA requested evidence-based, lower impact measures to encourage diversity in forest stand species and age classes. In caribou ranges, we also supported so-called ‘Level 1 control’ by the Alberta government. Such control consists of aerial surveys and selective removal of MPB-infested trees.

One government research effort I reviewed examined northern Alberta mountain pine beetle impacts to merchantable timber, a key forestry industry concern. Detailed in two Forest Health and Adaptation in Alberta annual reports, 412 townships were analyzed using high resolution aerial imagery. Strikingly, the researchers determined that only 16 percent of pine-leading stands had 30 percent or more merchantable wood mortality. Only four percent of pine-leading stands had greater than 50 percent mortality of merchantable wood; the technical term for this is ‘merchantable basal area’ mortality. The Level 1 control strategy wasn’t employed in these townships for one of two reasons. Either MPB infestations were considered too high for selective removal treatment to be cost-effective or the affected pine stands had low connectivity so the spread of MPB was considered unlikely.

The research concluded: “Subsequent to the large MPB migration into Alberta in 2006 and 2009, pine stands in the northwestern [area] were expected to be severely impacted but the results of this project contradict that line of thought. Forest companies have been aggressively targeting MPB-infested stands and [the Alberta government’s Forestry division] continues to be very aggressive in Level 1 control work.”

Should either the Level 2 surge clearcuts or the Level 1 selective removal be credited for slowing down MPB spread? When it comes to our foothills forests, elevation may be the key factor, not human treatment. The Alberta government’s Forest Health and Adaptation Director noted in February 2020 that in higher elevation foothills forests, mountain pine beetles may be present but don’t seem to increase to serious levels. An elevation range of 1,200 to 1,400 metres seems to be a threshold separating severe impacts from less severe ones. Further research is underway to confirm that.

UBC scientists assessed Alberta’s mountain pine beetle management in 2017. They found that the territory colonized by beetles “was particularly sensitive to the efficacy of early detection and eradication, and the amount of level 1 control (single tree treatments), but not level 2 control (clear cut harvesting).” Level 1 control was effective provided it was consistent (annual) and comprehensive in areas of small infestations. Carroll, Seely, Welham, and Nelson suggested that clearcut harvesting was not effective due to strong positive feedbacks in MPB populations as infestations grow. Those feedbacks outstrip human control measures.

AWA’s understanding is that Level 1 MPB control activities do not create new roads or trails, and generally have minimal ecological impacts. Although it’s expensive, a positive element of Alberta’s MPB Level 1 program is that it provides low-impact forestry jobs to local communities. These findings reinforce AWA’s determination to engage with Alberta to end harmful, unsustainable, and ineffective Level 2 pine surge cuts as soon as possible.

A final observation, unrelated to the efficacy of Level 1 and Level 2 treatments, is that pine beetle outbreaks north of their historic ranges provide more evidence that human-caused climate change is a serious problem for Alberta forests. For this and many other reasons, it is urgent we act to significantly reduce carbon emissions.