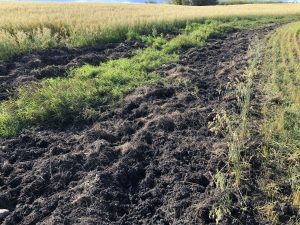 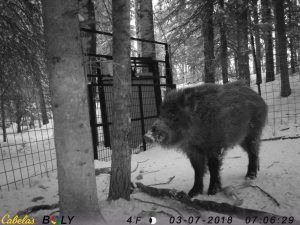 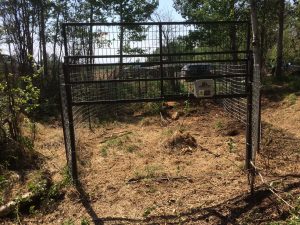 Ever had a close encounter with a wild pig? If it was anything like my experience, it can be rather terrifying. The sudden sound of creatures crashing though undergrowth caused this seasoned naturalist to turn tail and run. I was hiking in Costa Rica when this ambush occurred. And in my panicked state, my immediate thought was that it was a herd of wild elephants even though I knew elephants don’t inhabit that part of the world. It turned out they were peccaries, little 30 kilogram wild pigs native to Costa Rica and quite adorable when I stopped to realize what I was running away from.

Wild pigs in Alberta, however, aren’t so adorable. Wild pigs are an invasive species in Canada and are classed as a “pest” under the Alberta Agricultural Pest Act when they are not raised as livestock on farms. Most wild pigs in Canada are a hybrid of Eurasian wild boar and domestic pig that have resulted in a bigger and stronger specimen, a “super-pig.”

These tusked creatures can weigh up to 90 kilos and are described as “ecological train wrecks” since their destructive rototilling and wallowing behaviours are liable to leave farm fields and sensitive riparian areas unrecognizable.

According to a 2019 study in the Journal of Ecology and Evolution by Ivey, Colvin, Strickland, and Lashley, invasive wild pigs can adversely affect native vertebrate diversity through their competition for food sources and predation. Their generalist diet, though mostly plant-based, includes ground-nesting birds and their eggs, invertebrates, small mammals, and amphibians.

Wild pig invasions of crops and pasture can also cripple the agricultural industry. In the United States, invasive wild pigs are estimated to cost $1.5 billion US annually in damage and control costs, ranking third to rats and cats. Wild pigs also carry risk of disease transfer to domestic swine and other livestock. Such a transfer also causes devastating economic and production losses for the livestock industry.

World’s worst invasive vertebrate species
Wild pigs lay claim to being the world’s most invasive vertebrate species with the widest geographic range of any large mammal. Since their introduction to the Canadian livestock industry in the late 1980s, wild pigs have cleverly escaped their pens or been intentionally released that have resulted in established feral populations throughout Canada.

Ryan Brook, Associate Professor at the University of Saskatchewan and lead researcher of the Canadian Wild Pig Project, estimates the rate of spread to be more than 80,000 square kilometres per year.

With the highest reproductive rate among ungulates, these feral pig populations are rapidly spreading across the country. Given the wide range of food resources and habitats across Canada, wild pigs can produce 4 to 10 piglets twice a year. They also reach early sexual maturity at just 6 to 8 months and have a short gestational period of just under four months.

Ruth Aschim and Ryan Brook’s published research last May in Scientific Reports provides the first map of invasive wild pigs distribution in Canada (Figure 1). The majority of their spatial expansion occurred in Alberta, Saskatchewan, and Manitoba. The Aschim/Brook study expects that wild pig populations and range will continue to expand exponentially over the next decade in the absence of national and provincial management plans and control efforts.

Wild pig eradication in Alberta
According to Perry Abramenko, Assistant Provincial Pest Specialist with Alberta Agriculture and Forestry, 28 out of 74 Alberta Rural Municipalities have confirmed invasive wild pig presence. The majority of invasive wild pigs are concentrated in west-central Alberta, close to the forest fringe where they can easily raid crops and seek refuge in the forest.

In tackling the spread of this invasive species, the Alberta Government formally introduced a bounty program in 2008 where a hunter would receive $50 for a set of pig ears. Although the program has been ineffective in curbing wild pig population growth, it still operates and contributes to wild pig surveillance.

In 2017, an Alberta wild pig eradication pilot program was established with a focus on research and surveillance using a variety or combination of capture methods. Upon speaking with Abramenko about this pilot program, you can’t help but appreciate the level of patience and skill required to capture these elusive wild pigs.

The road to capture begins with field surveillance using a combination of cellular technology, drones, and trail cameras to monitor feeding and movement patterns. These wild pigs are then baited and captured using a corral with a remotely deployable gate. Using cellular technology, the corral can be viewed and monitored on a cell phone. Then it’s a simple action of “pushing the button on your phone,” says Abramenko. The captured wild pigs are euthanized and carcasses are taken to veterinarians for inspection and further research.

Apart from the patience and time in surveillance, Abramenko believes the biggest challenge lies in successfully capturing the whole “sounder” – namely, the herd of wild pigs comprising of one or more adult sows and their offspring. They are intelligent, cautious animals and it requires some patience to get the whole sounder “acquainted” so they will all enter and feed in the corral. In the U.S., New York State managed to eliminate its wild pig populations, before they became large and widespread, by employing similar “whole sounder” management methods.

Should removal efforts fail in capturing the whole sounder, they will disperse and become nocturnal and trap-shy. This will decrease the chance of capturing them in the future. This is why recreational wild boar hunting, with its exacerbating effects of dispersing sounders and teaching human avoidance, has been discouraged by Alberta government officials organizing invasive wild pig control efforts.

Alberta’s pilot program will run for another year before formal policies or regulatory decisions are made on wild pig eradication. Until then, Abramenko states they will be continuing to explore other innovative wild pig surveillance methods, such as using trained dogs to seek out wild pig scat, or using environmental DNA detection in water bodies where wild pigs may have wallowed.

Abramenko stresses that public reporting helps to reduce the knowledge gap in species occurrence given that wild pigs can occupy such a broad range of habitat types in Alberta. Wild pigs are easy to identify, making public reporting easy even for the most inexperienced naturalist.

Citizen science is recognized increasingly for its important role in early detection and mapping of invasive wild pigs. For example, citizen science formed a component of Ruth Aschim and Ryan Brook’s 2019 invasive wild pig mapping study, referenced earlier in this article. When compared to other detection methods, they found citizen science photos to be “a low-cost, spatially accurate, and unbiased means of validating wild pig locations”. New York State, wild boar-free since 2016, further supports the value of citizen science through the success of its public reporting system for invasive wild pigs. As stated by Mark Jackling in the 2016 Vertebrate Pest Conference proceedings, this reporting system forms a “critical and cost effective component of New York’s long-term monitoring plan”.

Alberta still allows wild boar-wild pigs to be raised as livestock. In 2015, Alberta toughened its minimum containment standards for these operations.  Electric fencing is required, incorporating either a partially buried fence or a double fencing system. Other management actions, such as bylaws banning wild boar livestock operations, could also assist in moving Alberta’s eradication efforts forward. Rural municipalities like Lac St. Anne County and Yellowhead County have recently taken a proactive approach and adopted such by-laws.

Mai-Linh is a volunteer researcher at AWA and has significant former regulatory experience in federal environmental assessment. She enjoys traveling near and afar to discover and experience Earth’s natural wonders.