A Load of Bull: The Saga of Listing Alberta Native Fish under the Species at Risk Act

Bull trout, Alberta’s ‘provincial fish,’ are found across Alberta’s Rockies and foothills. A member of the char family, they rely on cold, clean, complex and connected habitats in order to survive. Most of Alberta’s bull trout migrate large distances throughout their life, spawning in small tributary streams at higher elevations and then living downstream. Bull trout are often compared to grizzly bears, because they are also top predators in their aquatic habitats and their presence indicates a healthy ecosystem.

Unfortunately, Alberta’s anglers did not always view bull trout in a favourable light. They were considered a “junk fish”, as anglers wrongly believed these predators were negatively affecting other fish species. If caught, anglers would throw them out to rot. This behaviour collapsed Alberta’s bull trout populations in major waterways such as the Bow River. Since that time, human development in bull trout habitat has continued the decline, with clearcuts, roads, and industrial activity creating hotter streams, dirtier waters. Culverts hanging out above the water have disconnected migratory routes, stranding populations. Heavy angling pressures and climate change are compounding these problems. As a result, populations have declined between 30 and 50 percent over the past 25 years.

Alberta’s Athabasca rainbow trout are found throughout the headwaters of the Athabasca River system and its major tributaries in western Alberta. Having survived the last ice age, they are the only rainbow trout species that is native to Alberta (more southerly populations were stocked decades ago). The COSEWIC (Committee on the Status of Endangered Wildlife in Canada) assessment rates the threats to the species as “severe due to habitat degradation associated with resource extraction and agricultural practices.” They also point to introduced rainbow trout and fishing as contributing threats, threats compounded by climate change. The collapse of Athabasca rainbow trout is stunning, precipitous. Their numbers have fallen by an estimated 90 percent over just the past 15 years.

However, this urgency didn’t impress the federal government. It took Ottawa far too long to list these species. COSEWIC assessed bull trout as threatened in 2012 – seven years ago. Similarly, Athabasca rainbow trout received the endangered designation from COSEWIC in 2014; they waited five years to be listed under SARA.

AWA believes these delays are against the Species at Risk Act, which states that:

The Governor in Council, within nine months after receiving an assessment of the status of a species by COSEWIC, may review that assessment and may, on the recommendation of the Minister,

Why has the government chosen to interpret language such as “may review” in such a species-unfriendly way? The reasons are twofold. The first is that DFO has created an ungainly bureaucratic process that stands between COSEWIC’s designation and the legal listing. DFO takes the COSEWIC designation and then does a number of its own analyses, including a public consultation, an analysis of the potential for the species to recover, and a socio-economic impact analysis. This approach politicizes what was designed to be a scientific based assessment of species’ status in Canada. As a result, a number of species have not been listed due to the anticipated “significant socio-economic impacts” of a listing: (in)famous examples of this include endangered Atlantic cod in Newfoundland and endangered bluefin tuna. Surely the socio-economic impacts, in the medium to long term, would be greater if Atlantic cod and bluefin tuna ceased to exist. The process institutionalizes long delays, during which species continue to decline while they wait to receive protections – as is the case here for Alberta’s bull and Athabasca rainbow trout. DFO took three years to start its public consultation on bull trout listing and two years for Athabasca rainbows. 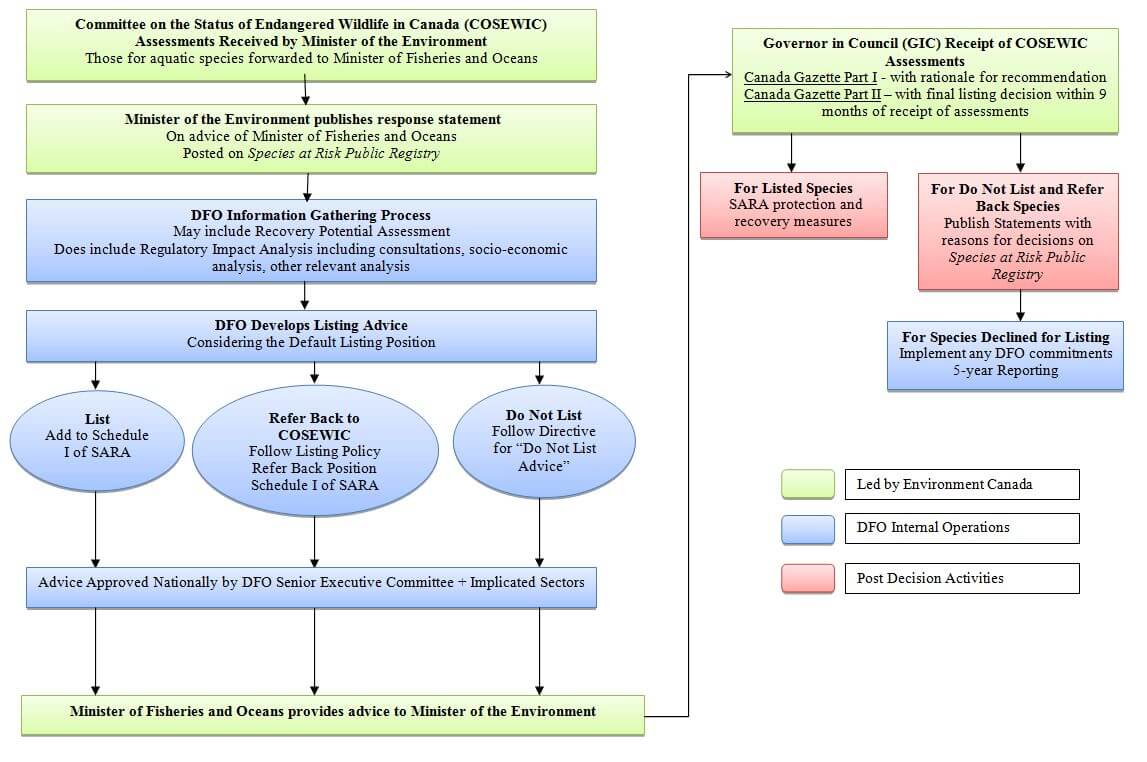 A flowchart developed by DFO to outline their approach to listing Species at Risk. SOURCE: FISHERIES AND OCEANS CANADA.

How is this delay allowed to drag on for years, when the deadline is supposed to be nine months? Permissive language such as “may review” or “may accept” doesn’t account for how government has flouted, openly disregarded, the Act’s intent. Nine months becomes seven years or five years because the government claims it can define when the Governor Council has “received” the COSEWIC designation. In the instance of bull trout and Athabasca rainbow trout, this “Order Acknowledging Receipt” wasn’t issued until February of this year. AWA argues this is totally against the intent of the Species at Risk Act.

Now that these species are listed, should we heave a sigh of relief? Have they been placed on a solid path to recovery? Not necessarily. Unfortunately, listing a species only makes it illegal to “kill, harm, harass, capture, or take an individual of a species,” or “possess, collect, buy, sell or trade an individual of a listed species.” And even then, DFO has passed an exemption to allow catch-and-release angling on bull trout to continue. Dr. John R. Post, who chairs the COSEWIC Freshwater Fishes Committee, explains that when populations are incredibly low, the stress placed on fish from catch-and-release angling can have an impact. In an interview with the Star Calgary, he commented that “Anglers who fish for them have to decide, in fact, whether they want to go and catch 30 or 40 fish in a day and release them, realizing that maybe four or five or six of them might not survive.” Dr. Michael Sullivan made a very similar point in his 2018 Martha Kostuch Annual Lecture.

I don’t think we need to stop catch-and-release angling everywhere; but we need to accept the very poor health of these species and set aside some havens to allow for trout recovery. Currently, as it stands, even the most basic protections that are afforded to at-risk species are not provided to threatened fish.

Of course, as Dr. Post also pointed out in a joint news release with AWA, “placing these fish on a species-at-risk list is not enough. The future for Athabasca rainbow trout and bull trout is uncertain unless we enact strong measures to protect the habitats on which they depend.”

How then do we move forward and protect habitat? 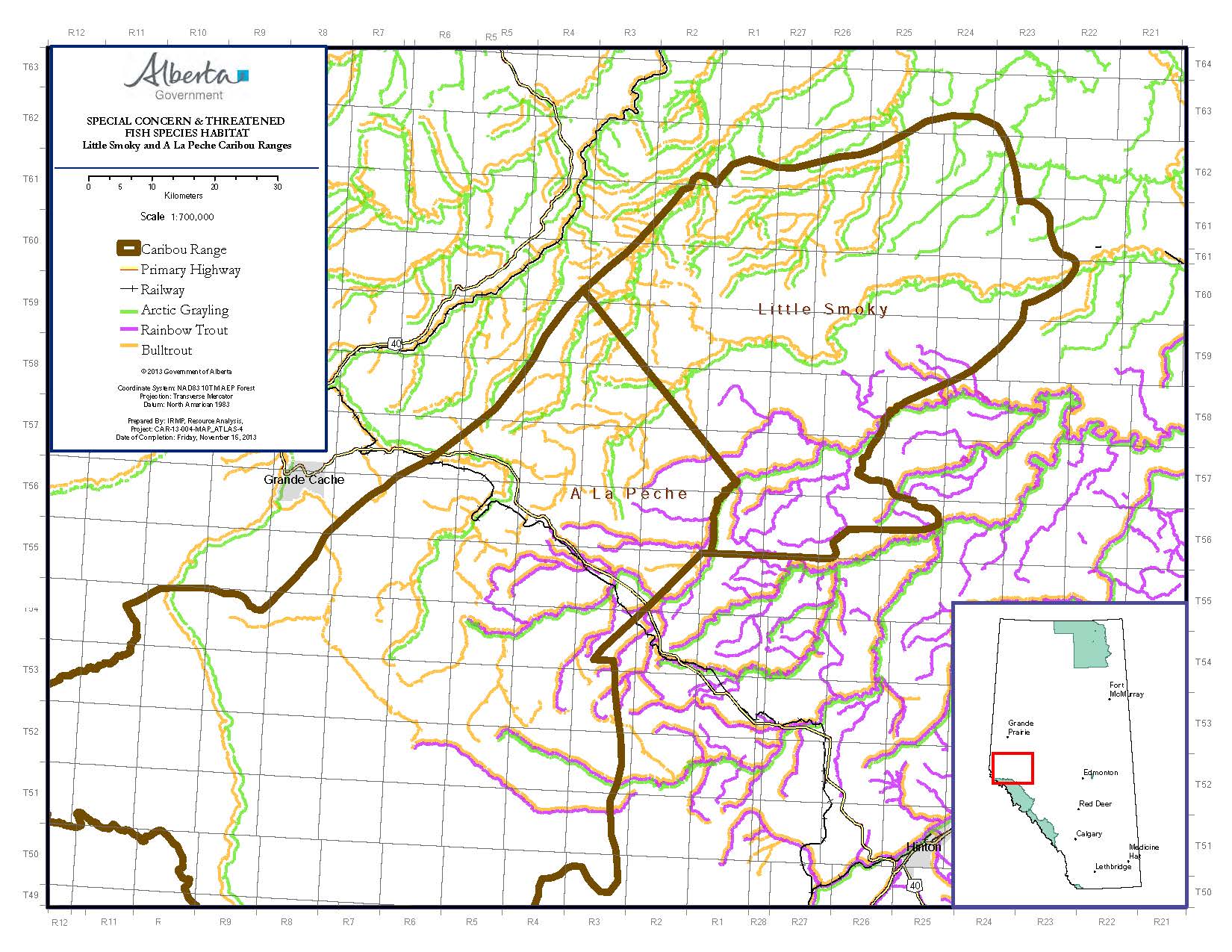 So not only are our species at risk laws particularly lenient, but our governments are also negligent when it comes to upholding the spirit of the lenient or bad laws that are in place. The situation with westslope cutthroat trout also exemplifies why “multi-use” landscapes, touted as the solution to integrating wildlife habitat alongside industrial activity, are so likely to undervalue wildlife habitat. When push comes to shove, human interests – “socio-economic impacts” – always win.

This is why we must demand that governments embrace protected areas as an effective method of species protection, because they force us to set aside areas for wildlife. Protecting our river corridors and critical watersheds would have immense benefits not only for our native fish species, but for a host of other species as well. For example, Athabasca rainbow trout, bull trout, and arctic grayling are located within the ranges of both the Little Smoky and A La Peche caribou herds. Protecting the habitat of one species would undoubtedly provide benefits for others.

In conclusion, it’s welcome that bull trout and Athabasca rainbow trout have finally been listed under SARA but we have to accelerate recovery actions, immediately. Government must be pressured to act expeditiously. Without expeditious action, it is likely these listings will be filed under “too little, too late.”