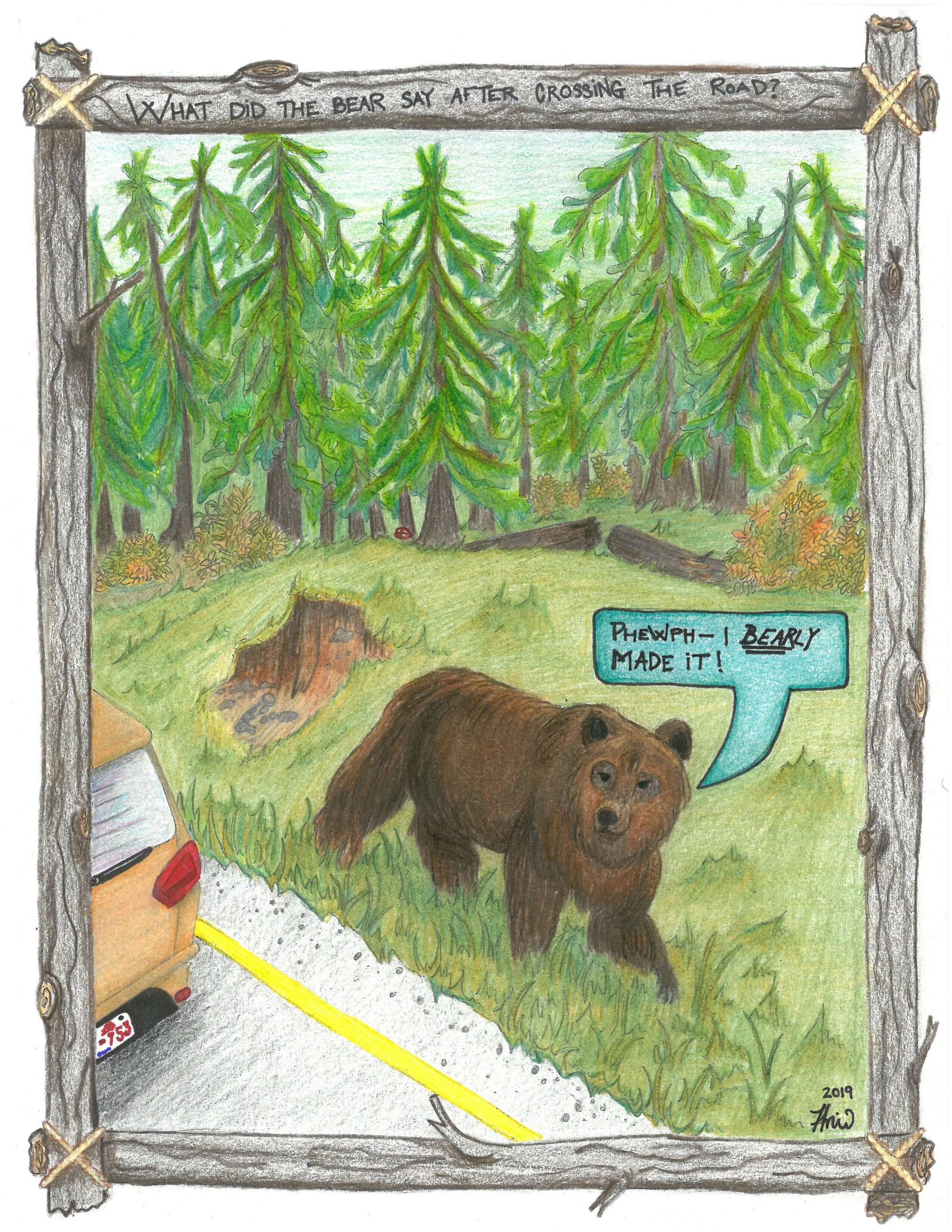 Question: What did the grizzly bear say after crossing the road?
Answer: I bear-ly made it.

All kidding aside, this joke has taken on a serious meaning over the last few decades. Today, road fatalities are an important risk to our less-than plentiful grizzly population. Bears in the Bow River Valley likely don’t see the humour in the joke.

The Bow Valley is a happening place. Its habitat is key to the prospects of many wildlife species; it’s also been a magnet to a growing number of people who want to live in the shadow of the Rockies. Statistics Canada reported Canmore’s population in 2016 to be just 8 residents shy of 14,000; this is more than double the town’s population in 1991, which was just a generation ago. And then there are the tourists, those who come to see and otherwise enjoy the breathtaking low montane landscapes in and around Banff National Park. In each of the last three years, just over 4 million people visited Banff National Park, approximately one million more visitors than the park saw in 2010-11.

The Bow Valley then serves as an integral corridor between the Front and Central ranges of the Rocky Mountains for both animal and human traffic alike. In the past 18 years, accidental human-related deaths such as vehicle collisions have claimed the lives of 75 grizzlies. This number is very close to 89, the total number of confirmed provincial poaching incidents. While stopping the legal hunt of grizzly bears in 2006 eliminated one source of grizzly mortality, our cars and trains continue to exact a worrying toll on grizzlies. Motor vehicles threaten population recovery. As the trend of vehicle-caused grizzly bear mortality continues to pose a threat, so too does the likelihood that Alberta could become, if it isn’t already, a population sink for grizzlies. By population sink I mean a territory where grizzly death rates are greater than birth rates, with that difference not being elevated by the number of bears immigrating into the province.

Unfortunately, this past summer offered indications that we may be on this troubling path. Too often, the news told us about human-bear conflicts and mortalities. In June, two grizzly bears were killed near the Trans-Canada highway within 10 days of each other; a male grizzly was struck and killed by a semi-trailer, while an emaciated female grizzly was euthanized days after being struck by a vehicle. August saw the death of a 275 kilogram male grizzly bear near Jumpingpound Creek. That death marked the third male grizzly to be killed by highway traffic in that area in the past five years. It’s not hard to understand why Sid Marty, the award-winning writer and former Parks Canada warden, calls the Trans-Canada Highway the “Meatmaker”.

It’s not the case that wildlife highway mortalities have been ignored by land managers. Banff National Park has installed over 90 kilometres of highway mitigation infrastructure, such as exclusion fencing or wildlife over/underpasses, to help reduce the risk of wildlife-vehicle collisions. Prior to the twinning of the Trans-Canada and the installation of mitigations, the highway was seeing an annual average of 100 elk-vehicle collisions.

While research shows that overpasses and fencing have reduced wildlife collisions on the Trans-Canada highway by 80 percent, this approach is not foolproof. Academic research illustrates that coyotes readily dig under fences or exploit maintenance-caused breaches while black bears are nimble enough to climb over exclusion fencing. Grizzly bears, on the other hand, have been known to test the integrity of the fencing by attempting to tear through the wires where they connect to fence posts.

Roads are not the only culprit impeding wildlife ranges and populations; railways also kill wildlife and pose a barrier to movement and effective habitat use within the Bow Valley. Wildlife are generally attracted to railways for foraging opportunities; ungulates move along the railways looking to feed on spilled grain or plant growth. Larger carnivores such as grizzly bears do this as well; they get the added bonus of feasting on the carcass of animals that were not fast enough to avoid getting struck by a train. Grizzly bears themselves are also potential victims of train strikes; in fact, the February 2019 issue of Ecosphere reports that, since 2000, trains have been the leading cause of grizzly bear mortality in Banff National Park. Jim Pissot reported that, between 2000 and 2007, seven adult grizzly bears were killed by trains in Banff National Park, leaving five orphaned cubs that did not survive the year without their parent. In a recent media interview, ecologist and biology professor Collen Cassady St. Clair of the University of Alberta, suggested that as many as of 21 grizzly bears have been struck and killed by trains in Banff since 2000, where the resident population of grizzlies is approximately 60 individuals. Aside from increasing wildlife mortality, railways also inhibit wildlife movement. As is the case for roads, railways limit the movement of animals through a landscape. This can translate into reduced or limited use of a particular habitat, restricted genetic flow, and ultimately, lower reproductive success of afflicted animals.

And while we know mitigations may reduce wildlife mortality rates, research has shown that the safety benefits of highway and railway mitigations are not equally distributed across the animal species that use the Bow Valley. They have different impacts on different populations. The evidence clearly shows that highway mitigation efforts are far more effective at keeping ungulate species such as elk and deer off the road, than they are for black bears and grizzly bears. The Ecosphere article by Gilhooly et al also suggests that mitigations in certain areas may funnel wildlife species towards adjacent railways, trails, or roads where access is easier. This increases their potential risk to be struck in an alternative location.

Installing mitigation structures along highways or railways also does not always deliver immediate population level benefits for all wildlife. This is particularly true for wide ranging, shy mammalian carnivores such as grizzly bears and black bears. Evidence suggests that bears generally take longer to adjust and use wildlife crossing structures because of their aversion to human activity. Avoiding higher volumes of traffic and people around wildlife crossings may even encourage or instill certain grizzly bear behaviours – such as occasionally crossing highways during the cover of night or choosing to travel and forage near secondary roads, trails, or even railways that are less busy. Banff National Park bears were observed to take up to five years to muster up the courage to cross a wildlife overpass, while elk and deer were utilizing these bridges while they were in the midst of construction. This aversion behaviour and adaptation period is an obvious impetus for implementing mitigation features sooner rather than later. Given the small regional population of grizzlies in the Bow Valley, “sooner rather than later” is especially important. The loss of a few individual grizzlies there is very significant for the future health of that population.

AWA and many other environmental groups have long advocated for measures, like wildlife overpasses and exclusion fencing, that will reduce the number of collisions between wildlife and vehicles. However, what the research tells us is that we need to be more selective with respect to where these measures are installed. Land managers are trying to improve the efficiency of infrastructures that are currently in place. Parks Canada has installed aprons at the base of fences, electric mats at the ends of fences, and floppy edges or outriggers on the top of fences to deter or slow animals attempting to breach them. Parks Canada has also lowered the overall speed limit of the Trans-Canada Highway (more enforcement of those lowered speed limits would be welcomed). They also have installed stationary and portable electric animal warning signs placed at hotspots along the road.

Colleen Cassady St. Clair’s research team has taken the approach of increasing wildlife’s ability to detect oncoming trains, rather than attempting to restrict their access to them entirely. Similar to the lights and bells train system used on urban and rural roads, the system is triggered and alerts wildlife of an approaching train. While this does not entirely solve the problem, preliminary results show that wildlife on the railway “leave the area a few seconds earlier than they otherwise would.” This could make an important difference to individual survival and to the stability of a local population. These deterrents have also been complemented by management approaches to increase their efficiency; Canadian Pacific Railway has a vacuum truck in service to clear spilled grain on tracks. More than 10 years ago, they also implemented a training program for grain handlers at loading terminals that promotes decreasing the amount of spilled grain on hopper car tops and end plates and ensuring that grain discharge gates are fully closed and operational.

While it’s encouraging to see these initiatives, it is important to remember that our responsibilities to the safety of people and wildlife alike is far from fulfilled. It is an ongoing commitment. In an ideal world, protecting wildlife connectivity, in addition to habitat integrity and intactness would be a deal breaker to a proposal to build a high speed arterial road such as the Trans-Canada and adjacent linear features through the Bow Valley. Obviously, that is not the case. The best we can do now is take a more integrated approach when attempting to implement or improve mitigation strategies. Plans for transportation mitigations would be strengthened if the trends in abundance for local wildlife population and the behavioural ecology of species were evaluated. There is also a need to prioritize species when developing mitigations; plans with a target keystone or vulnerable species such as threatened grizzly bears could have holistic benefits to local ecosystems. Targeted efforts could go a long way towards ensuring population viability and stability for a species that it is at risk of extirpation. Grizzly bears should be more concerned about finding a bush full of berries than in the possibility they could become a meal themselves in the ditch of the Meatmaker.