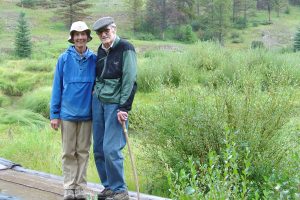 Mike McIvor of Bow Valley Naturalists calls Jill Seaton, “The Voice” of Jasper Park conservation and Ben Gadd declared Jill and her husband Basil to be the movement’s “heart and soul.” Everyone I spoke to about the impact Jill and Basil had on Jasper town and park, from retired park wardens to their town neighbours and fellow naturalists throughout the province, describe the couple as the utmost tireless defenders of park values – true eco-warriors!

When Jill, now nearly 90, hosted me and my two Labrador dogs overnight this early August, she was full of fun, enthusiasm, and remembrances. She and Basil had shared a lifetime of adventure and challenges, including living in Jasper for the past 30 years. Their tales are many and bold. Jill is known for standing up to absurd park pronouncements with “bring it on – I like a good fight!” I visited her to find out what had sparked her and Basil’s unabashed love of Jasper and environs and what was behind their determination to dig in there in a long-term defensive position.

As it turns out, references to “war” and “entrenchment” are apt for these two. Basil spent his early life serving in the British and then the Canadian armies. Early in his military career, Basil earned heroic recognition for battle feats on the Afghan/India border and in the jungles of Burma where he nearly lost his life. In Canada, Basil served as an army Captain and trained soldiers heading to battlefields in Korea. Stationed in Nova Scotia, New Brunswick and Edmonton, he finally retired from the military after a stint with the Department of Veterans’ Affairs at a post with Calgary’s Colonel Belcher Hospital. Camp Gagetown in New Brunswick was where Basil first sampled Canada’s wilds and found them appealing and worth greater exploration.

Meanwhile Jill, having survived English and Swiss boarding schools, was sailing to far-flung places like Malta and Jeddah in the Red Sea with her father, an Australian ex-Newfoundland bush pilot. In 1951 she arrived in Canada to visit her mother, met Basil in Ottawa, and married him after a six-week whirlwind romance.

Little in life seemed to faze the newlyweds as they moved from place to place in western Canada, searching for adventure and challenge. They sampled Alberta and various locations in BC; along the way bringing up a son and a daughter. Each new place opened their eyes to what was happening to the land and they began speaking up for voiceless wildlife and defending landscapes from human exploitations.

The early 1970s found them on an acreage near Okotoks where Jill became incensed about the plight of Alberta’s coyotes, then officially regarded as “pests,” open to any type of brutal killing, any time of the year. Coyotes were poisoned, run to exhaustion with snowmobiles, shot from truck windows, and hunted with dogs. Together with Grant MacEwan’s daughter Heather, they formed “Coyote Concern” and eventually got a change in Alberta hunting regulations that provided a halt to persecution, at least during breeding season.

The Seatons’ next move was to Burns Lake in northwestern BC, but not before Dr. Lu Carbyn, the dedicated wolf defender and researcher, asked Jill to help with his campaign to protect wolves under the International Union for the Conservation of Nature (IUCN). Jill’s canine experience to date had been coyote defense, so she was taken aback by Lou’s request. But, once ensconced at Burn’s Lake, she decided to interview area ranchers for their views on wolves and wolf control. Lou was impressed with her interesting findings and arranged for Jill to present them before an IUCN meeting in Edmonton. Jill had both feet on the road to activism!

Next, they moved to Cortes Island off Vancouver Island, where they stayed 11 years. Here Basil became a soldier in the intractable fight against aquaculture and to save wild salmon from its consequences. They were on Cortes Island during the 1980s when people were being arrested for standing up against the clearcutting of old growth forests. Jill was one of those arrested on Vancouver Island, but not over logging. Rather, she and 73 others stood in defense of Strathcona Park where Cream Silver Mine was preparing to set up operations on park lands. Having crossed a rope barrier to access the drilling area the activists were arrested and taken by police cruisers to Campbell River. A judge finally threw the case out and Cream Silver withdrew from the area. Would she do it all again? “Of course – the cause was right!”

Cortes Island’s dark winter skies and no place to hike but clearcuts, drove the Seatons to seek snow for cross-country skiing and sunny days. Where else could provide these, but Jasper, Alberta? They sampled three of Jasper’s winters from 1990-1992 before deciding this was their paradise. Besides, Jill was offered a job by one of Jasper’s icons, Ben Gadd. Ben, through the Friends of Jasper National Park, was setting up an educational institute known as The Jasper Institute, to provide people with weekend instruction in wildlife matters, wildflower identification, natural history and park issues. University credit could be gained through taking some courses. Instruction was by knowledgeable, qualified people like Drs. George Scotter, Val Geist and Paul Paquet and Jill became The Institute’s Registrar and allaround handy person

Basil and Jill were attracted to Jasper by the mountains and thoroughly appreciated and enjoyed the range of outdoor opportunities on offer. The longer they stayed, the more appreciative and defensive they became. Basil assumed a broad approach, encompassing global environmentalism, informing himself in depth with issues like climate change and the impact of relentless human growth on the world, and could soon speak authoritatively on how a changing climate could affect global food supply or park wildlife. Jill leaned more toward a naturalist’s interests, becoming “the voice” for dwindling caribou herds, goats squeezed from their habitats and harlequin ducks impacted by rafters. Together, their formidable skills in research and communication allowed them to wade through stacks of convoluted “park speak” documents, ferret out the essence, write endless, clear replies and submissions and maintain an informative web site, all on behalf of basic park values. They both served long terms as President of the small, but large-voiced, Jasper Environmental Association (JEA).

Over the years, the tsunami of tourist development proposals that were surging over Banff and Lake Louise began to hit Jasper’s shores too. The Seatons and JEA stood firm though and undoubtedly turned the tide back on many schemes that could make people rich at park expense. Without them, Jasper would surely be further down the road towards ugly Banffification than it is. Foremost amongst the fronts they held at bay are expansions to the Maligne Lake Lodge and to more ski development in Marmot Basin on critical caribou and goat habitat. Stopping rafting on the important harlequin duck habitat of the Maligne River was a satisfying success, as was bringing sense to the loss of critical wildlife habitat that a second long, linear transportation route, this one for bicycles, would have on the Banff-Jasper corridor. But, it is very hard to curtail established tourism providers like Brewster, (now owned by the American company Viad, Brewster attractions are now part of Viad’s “Pursuit Collection” of properties). Despite the use of social media to gain, in short order, 192,000 signatures against a proposed Glacier Skywalk defilement of the Columbia Ice Fields area the project went ahead.

Provincial conservation groups like AWA, are forever indebted to people like Mike and Deanne McIvor in Banff and the Bow Valley Naturalists, and to Basil and Jill Seaton and the JEA, for so reliably keeping us informed and “holding the fort” on park issues. Undoubtedly these local groups often felt abandoned in their considerable efforts by their larger provincial counterparts, who themselves were feeling overwhelmed by the load of “beyond park” issues they were grappling with.

Basil passed away in 2011, leaving Jill to carry on in military style, which she has done. She remains a main driver of the feisty little JEA, maintains its website, and sends out critical action alerts and updates on park issues. Jill is fondly remembered by folks like the McIvors for what could be a disarmingly humorous approach to dastardly tourism proposals like the Brewster Skywalk. She helped to organize a “get together” near the Ice Fields Centre where part of the entertainment was to spoof the Skywalk as the “Silly Walk” as per John Cleese and his Monty Python skit, and where “B. Rooster” also played a role. The event provided a welcome relief to those who had tied themselves in knots trying to turn Parks Canada’s attention back towards key park values.

Asked about the future, Jill expresses regret for the political direction being forced on Banff and Jasper National Parks and by the replacement of local staff with those sympathetic with development. “The good people have left, the ones that upheld park values – I don’t know what the outcome will be.” Banff’s McIvors know, and have labelled it “over-tourism”.