Following up on December 2017’s Wild Lands Advocate, “Cleaning up after Ourselves: Oil Sands Mines Liability Program Needs Major Reform”, I viewed other jurisdictions’ mining liability programs to see what the Alberta government could learn. I compared jurisdictions where companies were legally required to post reclamation securities and compiled the key points of their programs. Alberta’s mine liability program, as mentioned in Carolyn Campbell’s article, is fragmented and underdeveloped. Currently coal mines have elected to pay full financial security while oil sands mine companies pay a company asset-based calculation. These asset-based calculations leave large potential for unverifiable liability calculations and inadequate security payments during a mine’s peak revenue years. This risks underfunding future reclamation projects.

B.C.’s legislation requires a 100 percent financial liability payment from projects that will require long term water treatment and/or sites owned by a single company; this payment is collected at or prior to site closure. The amount is determined by the Chief Inspector of Mines, which means that discretion can be used to reduce a company’s payment. British Columbia has many of the same problems that Alberta has with the gap between liability amounts and financial security held.  This too results in potentially unfunded cleanup costs, although Alberta’s gap is much larger [Figure 1]. 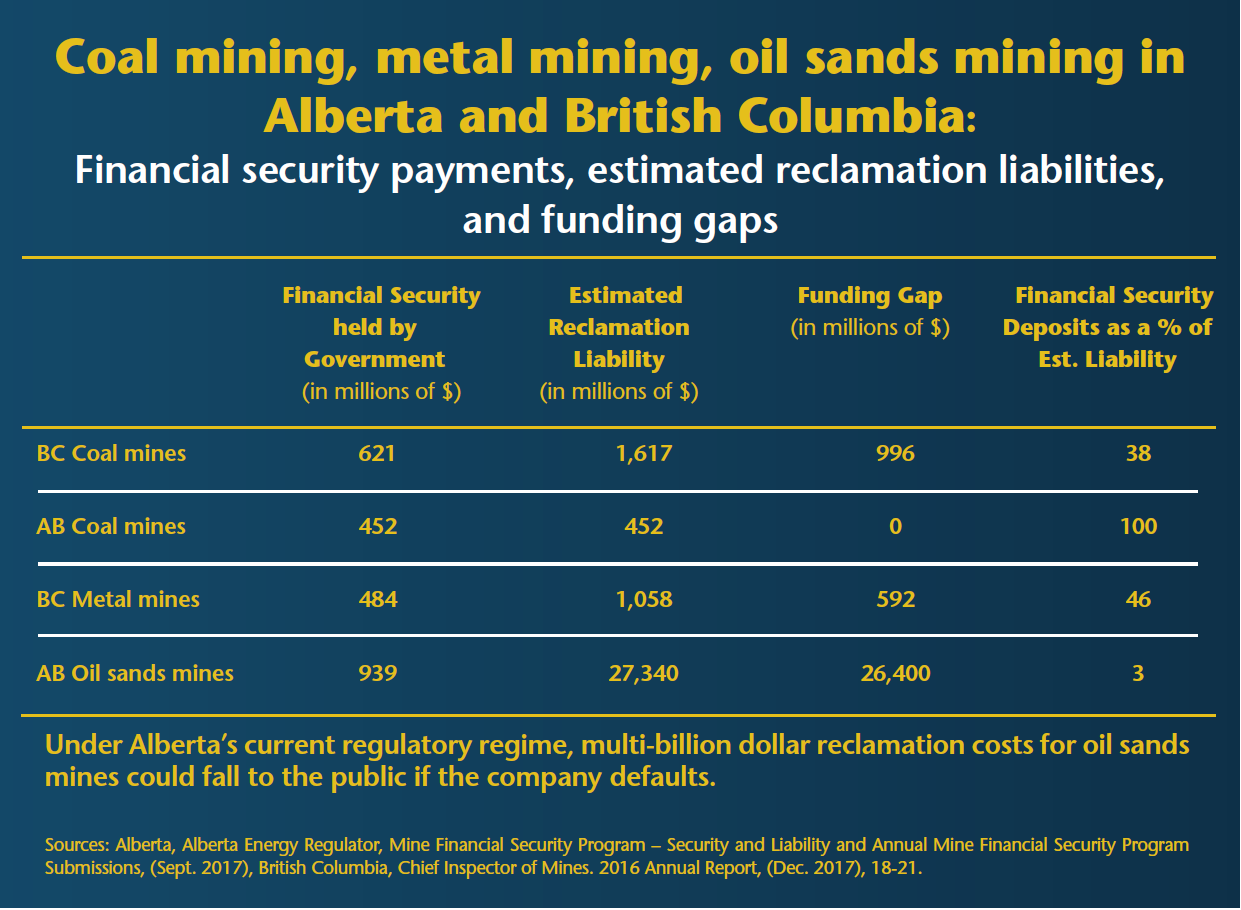 However, B.C. is actively working to improve its Mines Act and associated Mine Reclamation Fund. They commissioned a report by Stantec, published in 2016, comparing mine reclamation financial security approaches in many jurisdictions. British Columbia has appointed a review committee for its ‘Health, Safety and Reclamation Code for Mines’ with two sub-committees that have produced a number of Code changes since the tailings breach at the Mount Polley Mine in 2014. The most recent change of the Code was June 2017. Alberta should imitate this with the Mine Financial Security Program and how it is implemented.

Moving to the east coast, Nova Scotia has minimum requirements, but also “best practice.” The best practice is to require 100 percent financial security to reclaim peak disturbance of the site, according to Stantec’s 2016 report. Financial security held by the government can be reduced as progressive reclamation occurs. However, the actual legislation is not as strong as other jurisdictions and there are some instances that allow liability amounts to be under estimated and underfunded. The government of Nova Scotia revised its Mineral Resources Act and regulations between 2016 and spring 2018, but the announced changes do not strengthen reclamation security.

Looking northwest and south respectively, best practices in Alaska and Nevada provide a 100 percent security that includes the cost of long-term water treatment and the closure costs of the mine(s). This amount is subject to periodic reviews which can result in reductions, or increases, of the liability and security amount. The final liability amount is reviewed by state regulators, and also by federal agencies if the mine is on federal land. In Alaska, the liability amount established in the statute is a “reasonable and probable cost of reclamation.” Alaska reviews mining permits every five years and usually requires financial security equal to the maximum liability projected in that five-year period. In Nevada, mining operations must limit disturbance to the amount they have financially bonded at the time. However, up to 75 percent of that security can be provided through a ‘corporate guarantee.’ This is simply a promise to pay made by the company itself or a closely associated entity. Nevada provides a publically available Standardized Reclamation Cost estimator and cost inputs that they update annually; companies have to provide backup evidence if they use other costs or models.

Within the European Union, Directive 2006/21/EC of the European Parliament and of the Council of March 2006 addresses this issue similarly to the best North America programs. They require 100 percent financial security to cover reclamation by a suitable and independent third party. The EU legislation appears to allow member states to substitute their own legislation and follow those laws instead of a common EU mining regulation, but the EU Directive lays out minimum expectations.

Across the Pacific ocean, Western Australia has approached the problem with a unique perspective. They expect companies to pay their reclamation obligations but they don’t require upfront security. Instead, they have a Mining Rehabilitation Fund which is reported to and paid into annually by all qualified companies, as a tax. This fund is used for rehabilitation of both legacy abandoned mines and any new mines that may default on reclamation requirements. A company’s payment into this fund is generally one percent of their own reclamation liabilities, which can rise if it is shown that the mine paying is at risk of defaulting. Mines with a rehabilitation liability estimated below $50,000 do not have to pay into the fund. This annual liability estimate is determined by the land usage and amount of land factored by one percent. The unusual part is that the Western Australia government has a rehabilitation liability estimate calculator available online. This allows the public to see what the associated unit costs of remediation are for different mine features and infrastructure. However, this system does not address different land types that the mining activities impact. These differences, such as between peat wetlands and upland forest in Alberta, may have significant reclamation cost implications. While the Western Australia government also makes the reclamation reports available to the public, the company’s total calculated liability costs are kept confidential, unless the company decides to release the information themselves. The largest mines in the state negotiate separate reclamation requirements, and most are not required to post reclamation security.

In 2017, the Alberta Energy Regulator publicly disclosed each mining company‘s posted financial security and the province’s total mine reclamation liability, for the years 2014 to 2017.  However, within that liability statement there was no breakdown of landscape outcomes and associated fiscal data for interested third-parties to review. Since 2015, British Columbia has published financial security and estimated liability for each company, a step up from Alberta. Even better, Alaska and Nevada make mines’ draft liability calculations available for public comment before they are finalized. Further to Campbell’s points in her December 2017 article, more disclosure of financial liabilities, responsibilities, and annual reviews of remediation efforts or reports would improve the rehabilitation efforts in Alberta’s oil sands.

Madison Warne is a second year student in SAIT’s Environmental Technology program. She loves to go biking, hiking and snowshoeing in the mountains. She spent a week as an intern at the AWA.