The South Saskatchewan Regional Plan released today by the Alberta government is a small improvement from “business as usual” but remains a missed opportunity for meaningful protection of the region’s natural landscapes.

“We welcome the creation of new and expanded Wildland Provincial Parks in the regional plan, including the Castle Wildland Park,” says Alberta Wilderness Association (AWA) Conservation Specialist Brittany Verbeek. “But those 546 square kilometers (54,588 hectares) are only half of the land base in the Castle that conservation groups and many other Albertans have been asking to see protected for years.”

The increased conservation areas in the mountains may help the recovery of certain species at risk like the grizzly bear and bull trout. However the areas designated as parks remain patchy, omit critical valleys supporting unusual plant and animal diversity, and do not provide the connectivity and landscape-level protection that many species need to survive. The plan further delays urgent action on unsustainable off-road motorized vehicle access across most of the public lands headwaters of this region.

The plan also does not provide the claimed balance between conservation and economic development when eighty percent of this region’s species at risk are in the grasslands where there is not a single designated conservation area.  Oil and gas development continues and native grassland conversion into agricultural lands is still possible with this plan. AWA notes that the Milk River and Wild Horse Plains areas appear on a map for priority subregional planning. For this to be meaningful, AWA is calling for a moratorium on new industrial disturbance in these important ecological areas until those subregional plans are developed.

For a plan intended to guide decisions on how to manage increased competing uses on the same landscape, the plan falls far short of that goal. It remains filled with ambiguous language as it tries to allow everyone to do everything in the same place, at the same time.

“Pieces of the plan that will help with headwaters security, wetlands protection, and biodiversity protection outside of the conservation areas will not be finished for another year or more, when we desperately need limits on human access and industrial development now,” says Verbeek.

The South Saskatchewan regional planning process began in 2009 as part of the overall Land Use Framework policy for the province. This is the second regional plan that has been released, the Lower Athabasca Regional plan having come out in August of 2012. 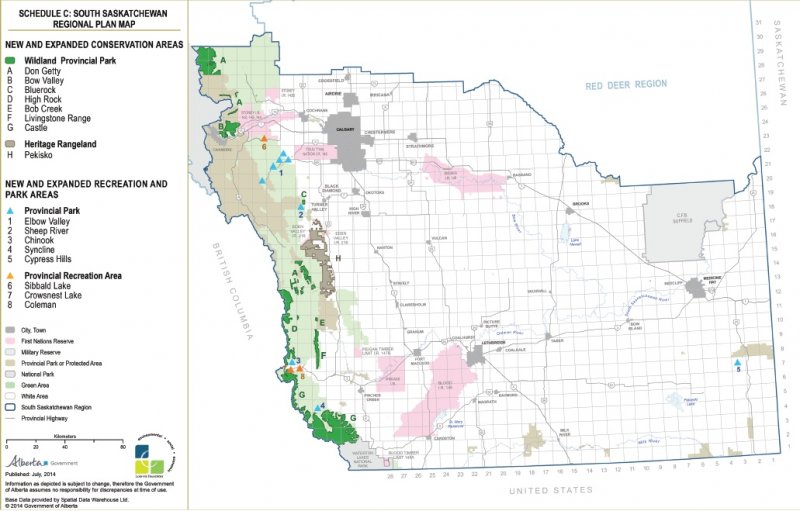