News Release from AWA and Wolf Matters. International scientists have called on the Alberta government to eliminate its archaic wolf bounties. In letters released today, they describe Alberta wolf bounties, which are funded by private groups such as the Wyoming-based Wild Sheep Foundation and by local governments, as outdated and ineffective in managing wildlife. Alberta Wilderness Association (AWA) and Wolf Matters welcome this call by IUCN (International Union for the Conservation of Nature) wolf experts, and urge the Alberta government to modernize its wolf management and end wolf bounties. 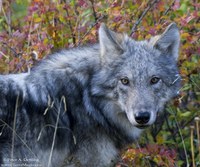