Isn’t This Where We Came In? Slapping a Band-Aid Over the Bighorn’s Canary Creek

Wild Lands Advocate article, October 2013, by Sean Nichols. The Canary Creek area experienced exacerbated levels of erosion in 2013 due to high levels of water and unmonitored use of OHVs on existing and newly bulldozed trails. Concerns were addressed to the AESRD in 2012 over the significant erosion damage and AWA continues to receive little positive response from the AESRD despite re-addressing these concerns in 2013.

“The ground in the river valley bottoms is boggy and porous, easily eroded, and prone to washouts. Attempting to put OHV trails through these systems aggravates the situation by channeling waters and creating paths for intense erosion.” 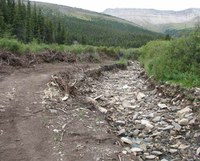