Greater sage-grouse (Centrocercus urophasianus urophasianus), the largest grouse in North America, is a year-round resident of the sagebrush range of the semi-arid mixed-grass prairie regions of south-eastern Alberta. Currently, sage-grouse are located in the southeastern corner of the province, centered south and east of the town of Manyberries. This 4 000 km2 area contains extensive native prairie and sagebrush flats, which form unique habitat for sage-grouse. Canadian sage-grouse are entirely dependent on silver sagebrush as a source of food and shelter. Sage-grouse have experienced decline in all parts of their range, and in Canada have been designated as Endangered since 1998. The Minister of Environment and Sustainable Resource Development approved sage-grouse for listing as Endangered under the Wildlife Act in Alberta in 2000.

The source of the species decline is poorly understood. However, many potential threats have been identified. Continued cropland conversion south of the Alberta border may increase isolation of the Alberta population. Water impediments may affect the health of the silver sagebrush communities required for sage-grouse survival. Increasing industrial activity is known to cause disturbance to the birds and contributes to loss and fragmentation of habitat. Light to moderate grazing regimes generally favour sage-grouse, but recurring drought and climate change may have an impact on grazing practices needed to sustain healthy range and suitable habitat for sage-grouse. Disease, particularly West Nile virus, has the potential to have population-level impacts on sage-grouse. Predation and human disturbance from recreational viewing may also be impacting the population.

Despite implementation of many of the recovery actions outlined in the inaugural recovery plan, the Alberta population has continued to decline with the lowest count of 13 males recorded in the spring of both 2011 and 2012. As such, the goals specified in the inaugural plan are now considered long-term goals. Short-term goals to prevent extirpation of the species and facilitate meeting of long-term goals are as follows:

A translocation program was initiated in 2011 to increase the breeding population while recovery continues. As of spring 2012, 38 female and three male sage-grouse had been translocated to Alberta from genetically similar populations from Montana.

This recovery plan provides a series of actions required to meet each goal with timelines and lead agencies identified. The Plan focuses on habitat conservation and population increase, such that a positive trend in sage-grouse abundance is observed in the near term, eventually leading to a self-sustaining population. A major part of the recovery effort is to coordinate energy development with conservation of sage-grouse critical habitat. Reclamation of roads and well sites no longer in production should serve to reduce the industrial footprint and create potential habitat for sage-grouse. Promoting good range health in an effort to maintain existing habitat on rangelands will also help enhance habitat for sage-grouse and promote long-term sustainable grazing. In 2018, the Plan will be reviewed and updated, as necessary.

The cost of implementing the recovery plan is estimated at $2 980 000 over five years, including cash and in-kind support, but not including costs for captive breeding. A variety of agencies will be invited to participate in the funding and implementation of recovery actions. In considering recovery actions, an attempt was made to draw on existing programs to reduce costs and effort associated with implementation. 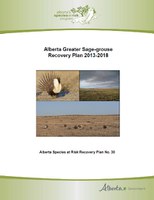