Greater Sage-Grouse: Failing them Shouldn’t be an Option

Time is running out for the Greater Sage Grouse as the Alberta male population hovers at a mere thirteen individuals.  The provincial and federal governments continue to stall on the recovery initiatives proposed by landowners and environmental organizations.

“The hard reality is that without the de-industrialization of some sage grouse critical habitat and using SARA to protect that habitat  such efforts simply delay a tragic inevitability – extirpation..” 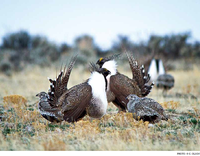