Sixteen years after it was officially “protected,” Rumsey Natural Area may finally be able to look forward to a future free of industrial development. Alberta Energy has made changes so that all new petroleum and natural gas agreements within the Rumsey Natural Area will now come with the condition: “Surface Access is Not Permitted.”

“This is an encouraging first step in the long-term phase out of oil and gas activity in Rumsey Natural Area,” says Cliff Wallis, AWA vice-president. “It has been a long, long time coming but we are pleased that Rumsey may be started along the road to true protection.”

Located about 40 km north of Drumheller, the 241-km2 Rumsey area constitutes the largest remaining tract of aspen parkland in the world. Rumsey is a mosaic of trembling aspen woodland, grassland and wetland habitats. This mosaic on the rolling terrain at Rumsey is important for many typical parkland plants and animals. Its biological significance lies mainly in the variety, quality and extent of representative natural habitats.

But in a bizarre contradiction, despite the fact that Rumsey was declared a Natural Area in 1996, it has continued to see more and more oil and gas development. New oil and gas leases were sold by the Alberta government; new wells have been drilled and new pipelines constructed. The incomparable values of the area have been affected as a result.

“Focus for management of the Rumsey Natural Area can now shift away from minimizing the impact of new industrial disturbances towards restoring and maintaining native vegetation. Experience in the Rumsey NA and elsewhere has shown us that it is very difficult, if not impossible, to restore rare Plains Rough Fescue grasslands following soil disturbance and invasion by non-native plant species,” says Cheryl Bradley, Alberta Native Plant Council. 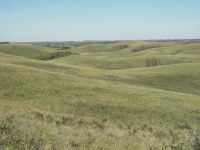