A University of Calgary study finds that average surface temperatures at Plateau Mountain have actually decreased – by 0.49 degrees – over 31 years. And whereas in 1977 you would have had to dig 22 metres to reach the permafrost layer, by 2007 that frozen layer had increased until it was just 13 metres below the surface. 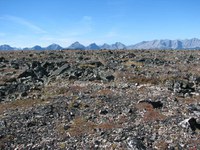